A number of key industry players including leading Generator ser manufacturers and consultants from across India, attended the launch. 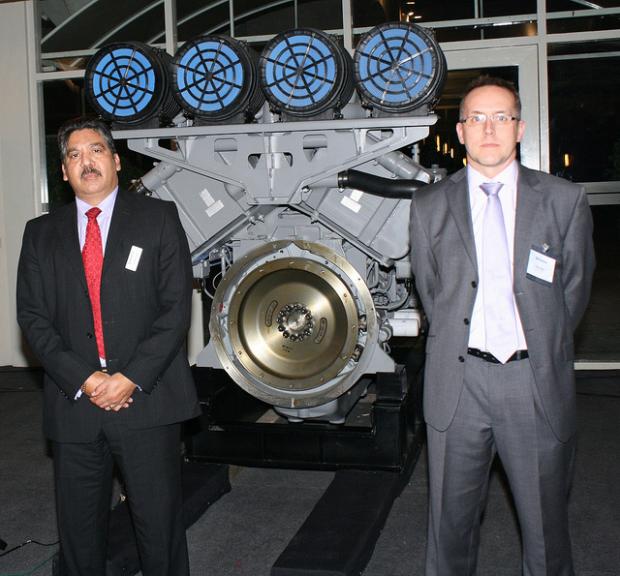 The launching that was held last December 08, 2010 in Mumbai was presented by Jaz Gill who was recently promoted to Asia Pacific Director. At the launch, he discussed the prime power of the new diesel engine which extends to 2250KVA.

The 4016-61TRG diesel engine offers power density and compactness that is yet to be matched. It allows installation into a 40 feet container saving space and reducing installation and freight costs.

This new engine provides the Indian market a cost-effective prime and standby power. It has become the power generation industry’s first choice of power due to its exceptional power to weight ratio and good load acceptance for both prime and standby power, aligned to overall cost of ownership, and reliability characteristics.

The new engine series extends the power range upwards by ten percent compared to the 4016TAG2A and is available as an ElectropaK or Elecrounit specification. This will give the Indian market a greater engine choice.

4016-61TRG utilises direct injection combustion technology; therefore, providing optimum power density for ease of installation through its compact family of three 61 litre air to water charge-cooled engines. This offers tangible benefits to both genset packagers and users. The 4016-61TRG range will be available at both 50 and 60Hz with standby powers from 2000-25000KVA at 1500rpm and 1650-2000KWe at 1800rpm.

“Our customers will undoubtedly benefit from the performance, power and excellent fuel consumption delivered by this new engine range. The introduction of the 4016-61TRG further strengthens Perkins’ presence as a full range supplier to the Electric Power market and represents a cost-effective solution to market requirements,” says Carl Emery, Perkins Engines’ electric power marketing manager, during the launching in China.

As the 4016-61TRG diesel engine made its entry into the Indian EP sector, Perkins continues to work their way to success in the Indian market. Leading Generator set manufacturers and consultants from across India witnessed the launching of the new diesel engine. “We are delighted with our significant entry into the key Indian EP sector and plan to build on this success into 2011 and beyond,“ says Jaz Gill, Asia Pacific Director of Perkins Engines.
The 4000 series range has made its strong foothold in the Indian EP sector through the last 3 years. The continuous utilisation of the Perkins Engines’ products by the Indian market forecasts an increasing demand in 2011 and beyond.

Perkins has previously made a resounding entry in the diesel generator business in India with a contract to supply over 175 4000 series engines to their largest Indian OEM – Sterling generators Pvt. Ltd.

One of the prestigious projects Perkins held is the Delhi Airport Metro Rail Express. It will provide emergency power to the five rail stations that connect the city centre of the New Delhi to the Airport. The project includes SITC of 11 DG sets ranging from 750 to 1250 KVA.

Another project that Perkins held is the first phase of the TRIL Infopark. Perkins will provide 1 MW of emergency power with 131.6 MW Sterling DG sets along with Perkins 4016 TAG2A engines. TRIL Infopark is an IT city that costs around US$770 million. It is a joint venture between the TATA Realty group and Tamil Nadu Industrial Development Corporation.

Furthermore, there is the 25MW power requirement of Amanora City wherein Perkins will supply ten 1010KVA, two 1500KVA and one 1700KVA DG set.

The EP sector is an important sector for Perkins across the globe, particularly in India. This is seen through the excellent sales of the EP range in India. Perkins Engines assures the Indian market the full Perkins EP range in 2011.

Perkins customises engines precisely to accommodate their customers’ needs and to be able to serve a wide variety of industries. Perkins’ engine solutions are trusted by more than 1000 leading manufacturers in the industrial, construction, agricultural, materials handling and electrical power generation markets.

As seen in India, the company continues to break through the global market, providing cost-effective engines and has an extensive global distributor network to provide product support solutions whenever and wherever needed around the world.