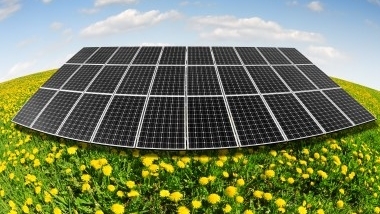 It is ideal for India because of its geographical location and the socio-economic opportunities it will offer, IEEFA Contributor Charles Worringham argues.

The global agrivoltaics installed capacity has approximately grown from about 5 megawatts (MW) in 2012 to approximately 2.9 gigawatts (GW) today, led mostly by Germany, France, and Italy, whose COVID recovery plan devotes over one billion Euros to establishing 2GW of agrivoltaic projects, the Institute for Energy Economics and Financial Analysis (IEEFA) said, citing reports.

There has also been an increasing number of research and empirical experience, as seen in the 2021 Agrivoltaics Conference attracting 84 abstracts and delegates from 39 countries in only its second year.

In India, a joint German-Indian report has listed 16 existing installations, and has also developed a publicly accessible online map of these projects.

An additional 7MW solar power project for Gro Solar Energy in Maharashtra with low-height crops between modules has been announced, and others are in various stages of development.

Whilst at a very early stage and composed mostly of small-scale research and demonstration projects, agrivoltaics remain relevant to India for three reasons according to IEEFA: scale and scope of electricity system growth, geographic, and socio-economic opportunities for the rural sector.

India is expected to see significant energy demand growth over the coming decades, along with the intensifying calls to accelerate clean energy transition.

The country will see a far more extensive power infrastructure growth of all types and strong incentives to build a geographically diverse and robust network, at speed. This will favour generation types that can be built quickly and at a range of scales, which could favour growth of agrivoltaics.

For the second reason, 60% of India’s land area is farmed, higher than the world average of 39%, according to World Bank data. Whilst areas such as Rajasthan offer especially high levels of generation potential, large tracts of the country are capable of producing solar power in higher quantities and more reliably than almost any European countries except Spain and Portugal.

As India faces declining farm size, with over 70% of rural households owning less than one hectare of land based on government data and unreliable weather, variable access to market and price instability any innovations that could strengthen the rural economy, stabilise agricultural employment and grow non-agriculture work could contribute to relieving the pressures of rapid growth on India’s cities.

Indian conditions may favour particular types of agrivoltaic technology. Technological advances in agrivoltaics take in novel configurations as well as specific equipment. A variation of special interest to India is the use of bifacial panels arrayed in widely-spaced rows, which in addition to the different generation properties explained below, reduces dust accumulation, an important aspect of maintenance, especially in more arid regions.

One such layout is being trialled by India’s National Institute of Solar Energy as well as by Germany’s Next2Sun GmbH and Märladalen University in Sweden. Vertical bifacial panel arrays have the property of generating maximum power in a morning and an afternoon peak, complementing the typical solar profile of midday peaking.

The late afternoon generation this configuration allows could partly relieve evening peak demand to the extent that loads can be shifted earlier, as may be possible for some residential cooling, or by reducing the time between generation and discharge of batteries, enabling more flexible charging schedules.

A research group at Lahore University of Management Sciences has undertaken extensive modelling of these layouts for relevant latitudes, suggesting high levels of generation relative to conventional configurations. If time-of-day pricing is introduced for feed-in tariffs as well as on the consumer side, vertical bifacial arrays could be a particularly attractive option for agrivoltaics developers in India.

Meanwhile in India, several groups have already made a strong start in research to establish the circumstances in which agrivoltaics can be viable. There are multiple variables whose individual effects and interactions have to be considered, and these are best studied by specialised research organisations.

These include the effects of different panel layouts, because maximising power generation favours densely arrayed panels, while maximising yield requires dispersing the panels so as to prevent excessive shading.

Many other factors, especially appropriateness for different crops with varying levels of shade tolerance, interactions with soil and water conditions, maintenance tasks and costs all influence viability. Establishing their effects goes beyond agricultural and technical research, because the financial outcomes require analysis of how optimising the various trade-offs affects farmers’ incomes under different ownership and tariff regimes.

The roll-out of agrivoltaics in India cannot proceed without taking account of the need to protect food production and food producers. India accounted for 22% of the global burden of food insecurity, the highest for any country, in 2017-19, it said, citing a report. Median farm size is under one hectare, with high levels of self- consumption of produce, most farm labourers owning no land, and multiple structural and market access issues confronting the sector, according to a report in the Indian Forum.

Any policies governing agrivoltaics must take account of these realities, as well as the needs of the 300 million additional citizens (still anticipated in coming decades despite recent falls in the total fertility rate), and be designed in such a way that farming livelihoods, food quality and output are sustained.

Practical experience has already shown that inadequate regulation can result in a backlash against agrivoltaics. For example, over-development of projects in Taiwan, attributed to the higher profitability of energy generation compared to farming, led the Taiwanese Council of Agriculture to remove the right of local governments to approve projects over 2MW and centralising approvals, according to a report in PV Magazine.

However Indian policy-makers proceed, adopting a carefully considered set of standards and definitions, matched with an approval process that safeguards agriculture, is essential. Without an agreed and clear process, many potential projects will wither on the vine.

Similar restrictions could be developed by India’s states to suit regional circumstances, with the possibility that the Union Government might set “backstop” standards as a means of safeguarding agricultural production.

Reforms of land-use classification could give farmers (and in most cases, farmers’ groups) the right to own and operate agrivoltaics facilities, rather than energy developers, discoms or other intermediaries, perhaps by enabling them to apply for redesignation of land in a special agrivoltaic land category.

Regional variation in crops and conditions, farming practices and markets for produce suggest that states should have primary responsibility for agrivoltaics, with support from the Union government limited to items such as minimum standards and definitions, incentive schemes, and centrally funded research and agricultural extension.

Specific grant schemes could promote the evaluation of current practices in local conditions as well as nurturing a uniquely Indian research program that can take economic and social as well as technical factors into account.

Funding for agrivoltaics programs within the Agriculture Ministry’s Sub Mission on Agricultural Extension could give farming communities greater confidence in trialling agrivoltaics methods, as has been implemented elsewhere, and state extension organisations should provide localised advice and support.

Most states do not allow non-farming commercial activity on farmland if it is not reclassified as commercial land. States could enable farm communities to establish income-generating agrivoltaic projects while retaining land ownership, by introducing a specific agrivoltaic land category.

Governments could also give financial incentives for the adoption of agrivoltaics by providing early-stage support to farmers indirectly through loan guarantees via commercial lenders, or by direct support mechanisms, such as extensions to the Union government’s PM-Kusum scheme.

Direct support mechanisms would be the preferred option if small farmers are not to be frozen out of opportunities to adopt agrivoltaics, because additional loans would simply aggravate debt burdens for many.

Grid-scale solar parks already have avenues to development through the designation of land for commercial purposes, and this will continue. There is merit in vesting ownership and development rights for agrivoltaics with farm communities rather than power companies, particularly through Farmer Producer Organisations, as these bodies are best placed to determine the type of project that may be most suitable given crop and soil conditions, options for panel and support structure layouts.

If farmers have sufficient power access and the grid in the area is well-developed, selling the generated electricity to discoms is may be the most attractive option but there has to be flexible regulations allowing specified levels of self-consumption may be preferable for farmers who wish to firm their own electricity access, or direct it towards new economic activity, such as food processing or refrigeration.

States could develop a system of incentives for successful co-production of power and crops, and retain the authority to discontinue projects if they consistently fall below the minimum established standards.