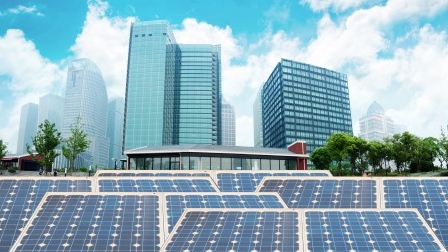 Accessible financing is a prerequisite to drive growth in the rooftop commercial and industrial (C&I) solar market in India. Presently, this segment accounts for almost 75% of the total rooftop solar installations in India with annual additional installations of 1.3 gigawatts (GW) to 1.8GW in the last few years.

Since 2015, rooftop solar project developers have raised more than US$2b, 48% (US$985m) of which came from equity funding and 29% (US$599m) from debt. Approximately 45% of these investments have been raised within the first eight months of 2021 alone, indicating a significant growth trend ahead. Almost all (99%) equity investments in this sector came from foreign entities looking to tap the Indian market, given the high growth potential and healthy return on equity.

The operating expenditure (OPEX) model accounts for only 10% to 15% of the total number of borrowers. In terms of quantum of loan, however, the share of OPEX is as high as 80% to 85%, due to the large project sizes that translate to larger loan sizes. Of the cumulative ~2GW of OPEX rooftop solar installations in India, almost 40% of these installations are financed via the two biggest concessional credit lines—the World Bank-SBI credit line and the GCF-Tata Cleantech line.

The rooftop solar installations witnessed a slight year-over-year decline of 13% in 2020 due to COVID-related disruptions. However, this period has also seen interest from customers in solar rooftops on account of the increasing need to optimise cost.

Also, the lapse of safeguard duty on solar modules at the end of July 2021 signifies the onset of the duty-free period for solar modules, which can bring the overall installation costs down. This period will last until 31 March 2022, after which a new basic customs duty of 40% will be applied to solar modules. These factors combined could translate into an estimated 2,500 megawatts (MW) of new capacity during 2021, a 37% year-on-year increase in installations. 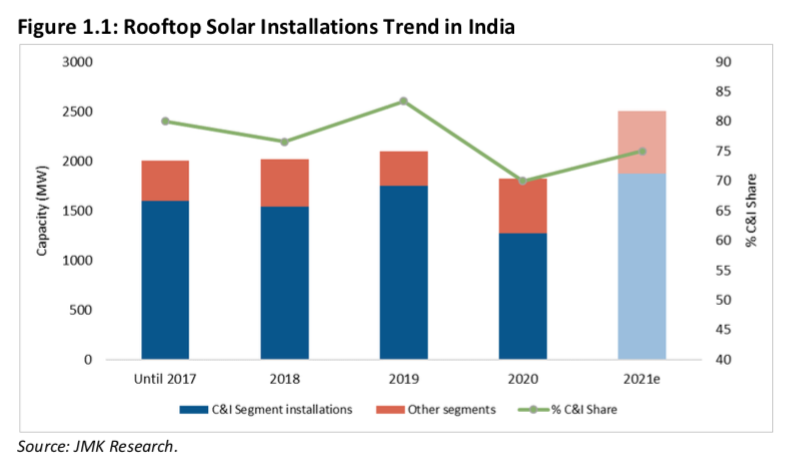 The two most adopted business models for rooftop ownership in the Indian solar industry are capital expenditure (CAPEX) and OPEX models. The OPEX model of rooftop solar financing has been gaining market share (in terms of annual capacity additions) gradually in recent years, as depicted above. The OPEX project tariff rate is about Rs3.5-4/kilowatt-hour (kWh; US$0.047–0.053), less than half the average of most state C&I grid tariffs.

According to JMK Research estimates, it is predicted that the share of OPEX projects for 2021 is likely to be 34%, or approximately 850 megawatts (MW). In terms of the number of borrowers, the OPEX model accounts for only 10% to 15% of the total number of borrowers. However, in terms of loan amounts, the share of OPEX is as high as 85%, due to the larger project sizes that translate to larger loan sizes.

Investments in the first eight months of 2021 in C&I rooftop solar segment have seen a sudden surge, compared to the previous two years (excluding the Amplus acquisition in 2019). The surge was mainly driven by substantial equity investments in Fourth Partner Energy in June 2021 and CleanMax Solar in August 2021.

An interesting trend to note here is that almost all equity investments come from foreign entities (99%) that are looking to enter the Indian market for the following reasons. The Indian solar market is viewed as a high-growth potential market by international investors. Also, solar installations generally have healthy rates of return on equity investments (as much as 14%) compared to investment options in other developed countries. In India, these entities can own as much as a 100% stake in renewable energy projects, which is not possible in other countries due to their respective regulations, along with longer power purchase agreement (PPA) durations (usually 10 to 15 years).

Foreign organisations are looking for investments to meet their Paris Agreement and net-zero emission pledges. More than 45% of the total equity investments were raised in 2021. The key reasons behind equity investments being concentrated within the players are their relatively higher experience in the Indian solar market, sizeable portfolios, bankable track records, and the distribution of portfolios across different states in India, which reduces risks for investors.

Financing under this category is usually obtained from concessional credit lines made available by development banks and multilateral agencies. The associated loan tenure is typically longer, ranging from 10 to 25 years. The World Bank-State Bank of India (SBI) fund for rooftop solar is a US$625m fund, with an additional US$23m allotted for technical assistance and first-loss coverage. The program started in May 2016 and the deadline is November 2021. The program is likely to be extended, given the number of unspent funds. As of December 2020, the World Bank had disbursed US$463m to SBI, of which US$228m (49%) was disbursed by SBI for a cumulative project portfolio of 451MW. Whilst there is no distinction as such between OPEX and CAPEX, minimum project sizes are 100 kilowatts for CAPEX models and 1MW total portfolio for RESCOs. Within the SBI network, 116 SME branches across the country have been designated to handle the World Bank credit line. To boost smaller projects, a customised loan product for projects as large as 1MW capacity is eligible for funding.

Tata Cleantech is another major lender in this space, which has obtained funds from the GCF. These loans are offered at an interest rate of 9% to 10%, and the loan tenure depends on the length of the PPA term and the creditworthiness of the customer. A majority of the projects financed by the fund are based on the OPEX model. As of August 2021, Tata Cleantech has contributed to the development of around 300MW of rooftop solar projects. In January 2021, Tata Cleantech received another line of debt funding from the Commonwealth Development Corporation Group, amounting to US$30m, which will be used towards financing clean energy projects, as well as water and e-mobility solutions. In March 2021, it signed an agreement with Japan International Cooperation Agency (JICA) for as much as 10b yen (approximately US$91m) in a loan for renewable energy projects. The loan will be disbursed through the private sector investment finance scheme of the JICA and will be co-financed with the Sumitomo Mitsui Banking Corp. Other than the concessional credit lines, there are also public NBFCs like the Indian Renewable Energy Development Agency that offer loans to the C&I segment.

With the equity infusion of Rs15b by the government of India during the Union Budget FY2021/22, IREDA will be able to extend an additional loan facility of Rs120b, in addition to its existing book size of Rs270b. The additional equity will also improve its capital adequacy, which will help IREDA in borrowing at lower interest rates, thus lowering the interest rates for developers. It is expected to now be able to finance around 4.5GW of renewable projects worth Rs180b-190b. 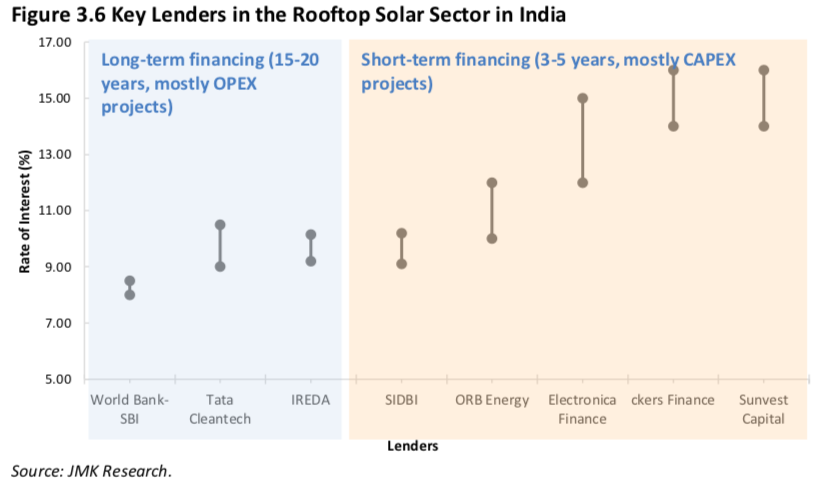 The nature of the micro, small, and medium enterprises (MSMEs) is such that they are in constant need of finance to grow their business whilst looking out for frugal ways to run their day-to-day operations. Given that electricity costs account for between 5% and 20% of operation costs (depending on the nature of the industry), rooftop solar offers MSMEs an excellent cost-optimisation avenue.

Under its current rooftop solar fund, the World Bank has allotted US$23m as a risk cover against default as a first-loss cover. This enables SBI to lend prospective customers who are perceived as a risk. This was a pilot project to allow the bank to absorb the initial risk. After its success, reports suggest that the World Bank is lining up another US$100m fund to allow MSMEs to obtain concessional credits under the scheme.

The C&I market has made significant strides in adopting rooftop solar in the last four or five years in India. These are mostly good creditworthy customers with BBB+ ratings that have easy access to finance. Top project developers are also focusing on this segment. However, with this market getting saturated, most big project developers are now either taking the open-access route or tapping into the international market to scale up growth.

Whilst these positive steps have been taken to make financing for rooftop solar more accessible, there is a need for innovations to scale up the financing of rooftop solar in India, especially in untapped market segments.