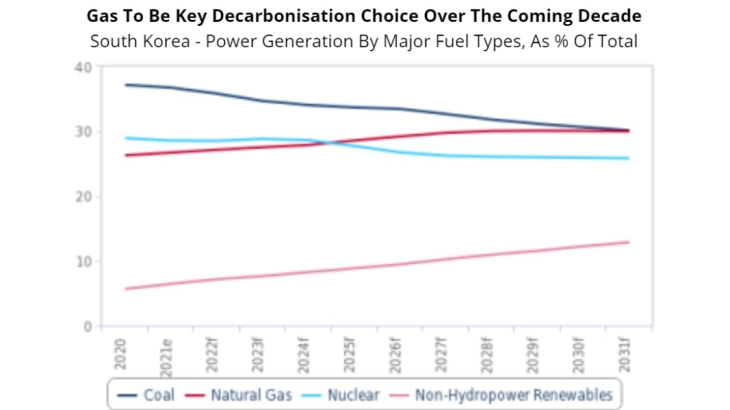 A new administration could reverse policies that reduce reliance on nuclear.

The South Korean government, under the leadership of Moon Jae-in, has focused on reducing reliance on nuclear and coal, which may not be the case if a new administration emerges out of the March 2022 polls.

“We believe that South Korea’s energy policy direction will likely remain in flux, particularly around the nuclear question, which continues to be politically divided across South Korea,” Fitch noted in a report.

“As such, we are seeing increasing pressure around the continued need for nuclear, which might be reintroduced in a new administration, presenting some upside risks to our current outlook.

This could lead to new LNG-to-power projects as LNG now qualifies for green financing and tax incentives. The draft taxonomy, however, does not classify nuclear as “green.”

In this light, Fitch Solutions forecasts coal and gas to account for 30.1% and 30% of the power mix by 2031, respectively. Strong growth is also expected for South Korea’s non-hydro renewables with both capacity and generation seen to more than double over the same period.

Despite this growth, Fitch noted that this will be largely insufficient to offset its existing thermal and nuclear dependence over the forecast period.

“Both called for the phasing out of coal, but differed on LNG – one calling for its total phase-out, while the other retains LNG with carbon capture technologies,” the Fitch report noted.

“It remains unclear which of the two net-zero roadmaps laid out by the presidential committee in South Korea will end up following, but the administration has dialed down these aims after encountering significant opposition from rival policymakers and relevant industry stakeholders.”