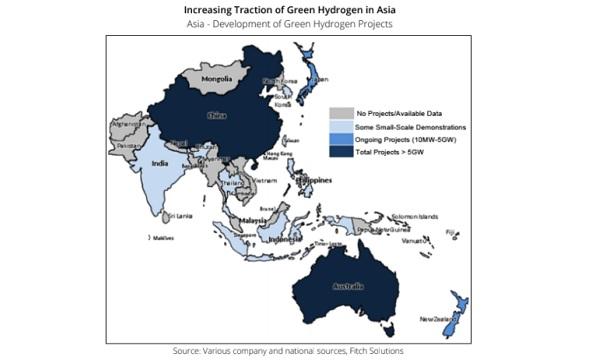 Asia’s electrolyser capacity is projected to reach 10GW over the coming decade.

Amidst increasing viability of the technology, government support and investor interests in several markets, substantial growth opportunities are abound for the green hydrogen sector in Asia Pacific over the coming years, according to Fitch Solutions.

The report observed increasing traction in electrolyser technologies as a carbon-free alternative, which involves the utilisation of electricity to produce hydrogen from water, primarily from non-hydro renewable generation sources.

Fitch estimates Asia’s electrolyser capacity to reach over 10GW over the coming decade, but this could still accelerate. “The resulting 'green hydrogen' is a highly adaptable energy carrier and can be used in a wide and increasing number of industry applications,” the report stated.

A key driver to its development is closely linked to the abundance of cheap low-carbon electricity. “We believe that the proliferation of renewable energy in the region, and its rapidly-falling costs, will push production costs of hydrogen down and drive adoption of the technology,” Fitch added.

According to a broad consensus, the cost of electrolysers could half and reach market parity with grey, fossil fuel based, hydrogen by 2030, making it a highly competitive energy alternative.

Further, Asia Pacific region remains a high-potential market, as it remains the fastest-expanding region for energy demand and renewables growth over the coming decades. The potential also provides a possible secondary use for excess power generation from intermittent renewables as a form of energy storage.

Pilot projects are already underway to establish the feasibility of hydrogen gas being integrated into existing gas infrastructures and networks, which could potentially offer further cost savings. With this, green hydrogen could play an increasing role over the coming decade.

The growth of green hydrogen in the region is expected to be driven by Japan and Australia, but there is also increasing support from China, India, South Korea, Singapore and New Zealand. Most of these markets have included hydrogen into their policy agenda.

Japan in particular was one of the pioneers into the hydrogen sector, being the first in the world to adopt a ‘Basic Hydrogen Strategy’ in 2017. The government has made investments into research and development in the sector over the past few years, and has continued to provide strong support and funding for several projects, the report noted.

“We stress that going forward over the longer term, Japan remains keen to move toward reducing the cost of green hydrogen production technologies in the region and stimulate the economy for imports back into Japan,” the report stated.

Meanwhile, Australia is considered to have the highest potential to scale up the development of green hydrogen and reach cost parity, as it has a very well-developed and expanding renewable energy market, which has already depressed electricity prices in recent years.