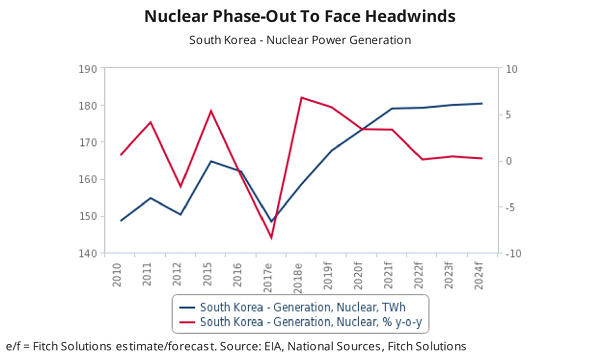 Public opinion is shifting in favour of nuclear after a heatwave has affected power supply and demand.

Increasing concerns about rising electricity bills and compromised energy security have resulted in a shift in public opinion in favour of nuclear power, Fitch Solutions noted, despite the Moon administration's ongoing commitment to phase out nuclear, which was reaffirmed in the recently-revised 2019 energy plan.

“Concerns over Moon’s anti-nuclear policy were voiced over 2018 as electricity demand increased unexpectedly due to a heatwave, and the supply/demand margin eroded. As a result, the government announced plans to increase the number of operating nuclear plants from 14 to 19 to meet the demand surge, showing the importance of nuclear to the country’s energy security,” Fitch Solutions said.

The firm forecasts nuclear generation to continue growing at an annual average of 2.2% between 2019-2024.

It added, “We believe that President Moon’s anti-nuclear policy will come under increasing scrutiny, particularly ahead of the upcoming 2020 legislative elections. The anti-nuclear policy continues to face strong and growing opposition, particularly from main political opposition parties - Liberty Korea Party and Bareun Party, which will continue to cause headwinds to the nuclear phase-out.”

In January 2019, under the backing of both parties, more than 330,000 signatures were collected to protest against the government’s decision to stop the construction of Shin Hanul reactor 3 and 4.

“Whilst we do not expect the lifetimes of existing older nuclear power facilities to be extended, we believe those under construction in the project pipeline will continue to progress. We have already seen developments in installed nuclear capacity across 2019,” Fitch Solution said.

Following approval from the Nuclear Safety and Security Commission, Shin Kori 4 was connected to the grid on April 22 2019, and is expected to begin commercial operations in September 2019. The construction of both Shin Hanul 1 and 2 was also 98% completed by the end of 2018, and fuel loading for unit 1 was scheduled in June 2019.

Shin Hanul 1 is expected to begin commercial operation later this year whilst Shin Hanul 2 is expected to come online next year. In terms of capacity, these new projects will offset those that are due for closure, leading to continued growth over the coming years, Fitch Solutions said.

The share of nuclear power in the electricity generation mix is expected to remain elevated over the coming years, at an average of 29% of the total between 2019 and 2024, as the nuclear project pipeline progresses.