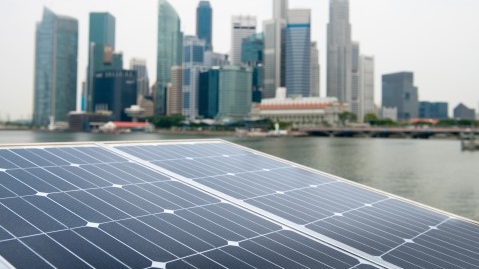 This is whilst also ensuring the country’s resilience from climate risks.

Thailand can develop its green economy whilst also building up its climate resilience, by banking on sustainable energy sources and improving its waste management, among others, according to a report by Bain & Company.

“Thailand’s location offers it regional connectivity, but also exposes it to high risks of climate events such as flooding and drought. It can build up its climate resilience, ramp up waste management, and export energy and agriculture,” it said in a report.

Bain identified opportunities that Thailand could focus on which include production of solar power, citing the completion of the hydro-floating solar hybrid project at Sirindhorn Dam which shows domestic demand for solar power. The country has also become an “export hub for Chinese photovoltaic (PV) players due to proximity and its anti-dumping duties.

Thailand faces challenges from extreme heat, whilst its capital Bangkok is vulnerable to flooding due to climate change. This poses risk to water resilience and security, Bain said, noting that two of its largest sectors—agriculture and high-tech manufacturing—are water-insensitive.

“Advanced water management solutions that address both water resilience and security, such as predictive analytics and treatment plants, have huge latent potential,” it said.

Thailand’s agricultural practices is another key opportunity to develop as its smart farming market is expected to reach $270 million by 2020. But Bain said that this could be fully “unleashed if technological, economic, and social problems of smallholder farmers will be addressed.

Electronic-waste management is another area of opportunity to develop the green economy of Thailand, a country with less than 400,000 tons of e-waste which also contains hazardous metals such as lead, mercury and cadmium.

Bain said having smart sensors and artificial intelligence sorting systems would be a “huge boost” to the sector, as the current system is too labour-intensive.

Bain also sees the smart city concept of Thailand that is included in its 20-year national development plan to continue receiving support from the government, with 39 cities in 2020 that had already committed to target smart city development. Having plans to handle climate issues like digital twin technologies “would be impactful,” it said.

Thailand should also focus on the development of sustainable infrastructures. The country has already committed to revamp its transportation system to have more motorways, double-track trains, and high-speed rail to link airport connectivity. These improvements are expected to generate $43b and will cut emissions.

Whilst the Thailand government has no net-zero target policy yet, it has committed sustainability policies such as 20% reduction of unconditional greenhouse gas emissions from business as usual by 2030, and 25% for conditional emissions.

It also targets to have 30% of its total installed capacity to be renewable by 2030, and 55% of total area to be restored as forest cover by 2037, Bain noted.

Thailand’s unconditional absolute annual emissions are set to increase from 2018 to 2030, but “conditional emissions to decrease; in both cases, Thailand outperforms Southeast Asia overall,” it said.