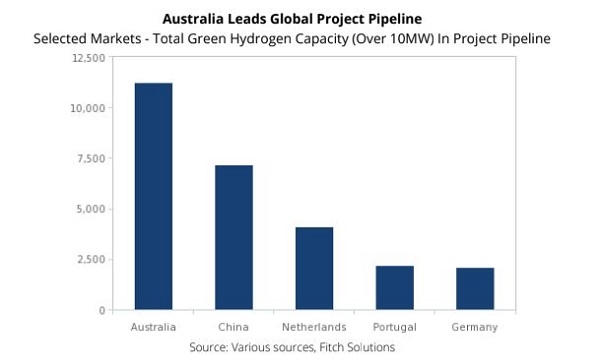 The falling costs of renewables is said to push production costs of hydrogen down.

The increasing viability of the technology as a complement to renewable energy has seen substantial growth opportunities for the green hydrogen sector in Australia over the coming years, according to a report from Fitch Solutions. The rapidly-falling costs of renewables is said to push production costs of hydrogen down and drive adoption of the technology.

As a result, Australia has a high potential to scale up the development of green hydrogen and reach cost parity given the growth in its renewables capacity, which has already depressed electricity prices in recent years.

In fact, prices fell to a record-low and occasionally dipped into negative ranges in recent months when grid demand fell because of the increase in household consumption from rooftop solar, amidst a broad slowdown in economic activity from the pandemic.

Regulators have warned of grid stability problems if renewables capacity continues to increase substantially over the coming years, and are mooting several solutions but these remain contentious.

The Australian Energy Market Operator is now looking to batteries and large-scale storage facilities as a long-term solution. Green hydrogen would be a viable alternative as it can act as a form of energy storage for excess renewables generation.

Furthermore, this could also be exported to other markets, which would create additional demand for renewables, unlocking more capacity growth previously bound by domestic market constraints.

This is also underpinned by strong government support and rising investor interests into the sector. The Australian government announced the National Hydrogen Strategy in November 2019, planning to develop the hydrogen sector into a new revenue stream for the economy, with commercialising hydrogen production as a priority.

The development of clean hydrogen production, an export hub and investments into R&D and demonstration projects is also backed by funding and support from the government on both the federal and state levels.

As a result, there has already been a significant increase in investor interest, with a rise in the number of hydrogen-specific developer start- ups. At present, Australia has one of the world’s largest electrolyser pipelines, at over 11GW, which continues to expand.

Whilst most of these projects remain in the pre-construction/planning stages, Fitch’s outlook remains bullish given ongoing progress and continued support from the government, particularly as many states remain keen to support renewables growth.

The Australian Renewable Energy Agency (ARENA) has also shortlisted seven developers under the Renewable Hydrogen Deployment Fund to fast-track the development of green hydrogen in Australia. Several ongoing green hydrogen supply deals, such as that between energy infrastructure firm Jemena and vehicle manufacturer Hyundai Australia, also support the ongoing development of the industry.