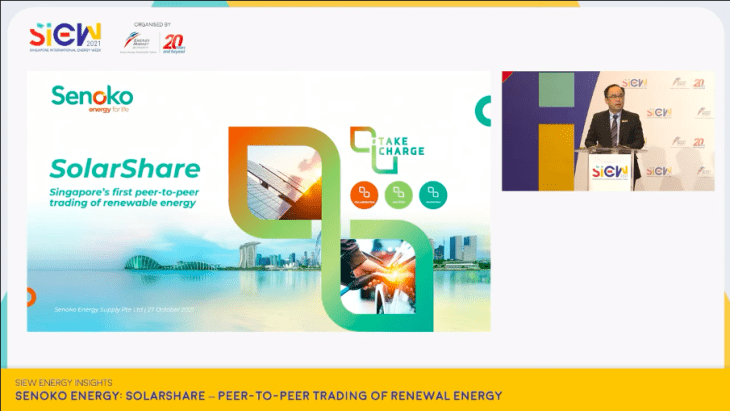 Following the launch of SolarShare, the company faced contractor issues in Singapore.

Senoko Energy’s SolarShare, a peer-to-peer renewable energy trading platform, is seen to help Singapore’s transition to clean energy but the company identified a few aspects to improve on to encourage users to onboard the trading scheme.

James Chong, senior vice president for commercial, said an important challenge they found during the pilot test of SolarShare is metering as their consumers have to subscribe to smart metering for the “real-time half-hourly matching,” whilst most households in Singapore are still using load profiling.

“This was easy to resolve as Senoko can easily bundle in the cost of smart meter into the project. However, even after we have done so, the meter data are provided to retailers six business days later, which results in delay in the visualisation of our solar share dashboard,” he said during a session in the Singapore International Energy Week.

“To mitigate this, we deploy Ampotech meters on top of the regulated meters as an additional layer for the purpose of visualisation. At the same time, this will also help us to evaluate if our meter choices can be deployed overseas in time to come,” he added.

On the generation side, household prosumers in Singapore are subscribed to load profiling where there are pre-assigned solar regions for exports and this works against SolarShare as it is aimed at “real-time energy matching and trading.”

Chong said they have to learn how to switch household prosumers to a real-time export meter. But it is not “commercially viable” for households to switch, and there is a high costs and logistics challenge to install a meter box, he said, noting that they worked with Right People Renewable Energy.

“We can now recognise that the final product that we embark on, have to be tweaked slightly to allow for household prosumers to participate in SolarShare meaningfully,” he said.

Mismatch of supply and demand is also a concern, wherein a hundred consumers participated and 43% were allocated with green energy. However, Chong noted that this is only because the platform is only at the pilot implementation stage.

Senoko Energy also faced contractor issues as Singapore’s electricity market is highly regulated and there are rules to adhere to for electricity contracts, especially with residential consumers.

“Senoko must think of how to offer the product without breaching the market rules. Being the first P2P trading platform on the national grid, we tread carefully and work closely with the regulators on our approach. By offering SolarShare as an added option, which allows a selected group of customers to buy green, it allows for Senoko to build both brown and green energy in our solar share pilot participants,” he said.

“It is clear to us that SolarShare could be both technically and commercially viable within Singapore,” Chong said following the pilot implementation of the project.

He said that it will help companies and individuals to shift to green energy without entering lengthy contracts and also encourage planting of new renewable assets like rooftop solar panels in homes.

How does it work?

SolarShare, which was piloted in July last year, was in collaboration with Electrify and Engie Factory.

Under the peer-to-peer trading platform, prosumers list their solar project on Senoko’s platform to indicate their generation volume and desired sell price.

Consumers will choose an available prosumer to buy from and the matching tool will allocate the sale of energy produced by prosumers to the consumers at the contract rates every 30 minutes, according to Chong.

Allocation will push through if the buy price set by the consumer is higher or equal to that set by the prosumer. Unallocated energy generated will be set at the prevailing pool price, whilst consumption not attributed to solar generation will be provided by Senoko, he said.

Chong said they are still in the planning stage for the onboarding of more people into SolarShare. He added that there were about 60,000 landed homes in Singapore but less than 2,000 households that have installed solar PV on their rooftops, which is a “huge potential space.”