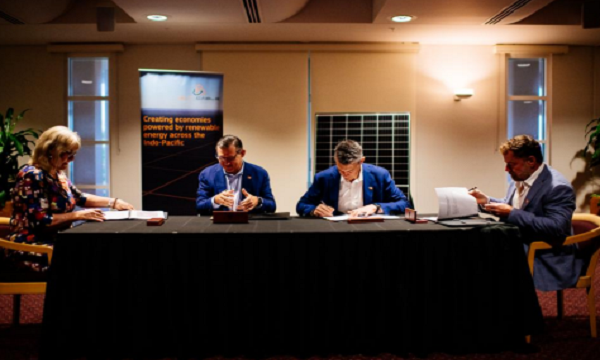 The project would supply up to 20% of Singapore’s electricity needs.

Singapore-based Sun Cable and the Australian Northern Territory Government (NTG) have signed a project development agreement for the Australian-ASEAN Power Link (AAPL), which would see the territory hosting one of the largest renewable energy systems across the globe.

Expected to reach a financial close in 2023, the AAPL will first supply electricity to Darwin by 2026 and Singapore by 2027.

With a project cost of approximately $21.3b (US$16b), the AAPL would comprise a 10 GW photovoltaic solar farm and a 30 GWh battery storage facility in the Northern Territory, as well as a 4,500 km voltage direct current transmission system via Darwin to Singapore. Eventually, the HVDC transmission system would extend to Indonesia.

According to Sun Cable, the project would “create about 1,500 jobs during construction and 350 jobs during operations, as well as over $1b in exports.”

Signing on behalf of the Northern Territory Government, Chief Minister Michael Gunner said: “This project will transform the Territory into a renewable energy powerhouse, and cement our position as Australia’s comeback capital.”

For Sun Cable CEO David Griffin, the project would “provide affordable, reliable energy to support industrial growth in Darwin, as well as supplying up to 20% of Singapore’s electricity needs.”