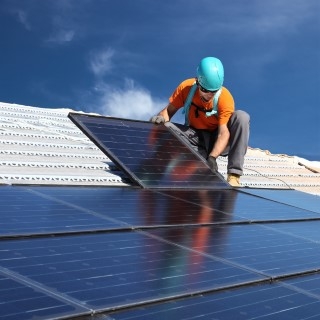 India will at least 10GW to local installations.

The global solar market has yet to show signs of turnaround after going through the turbulent 2016, according to EnergyTrend, a division of Taiwanese research firm TrendForce. It also forecasts that the global PV demand for 2017 will total just 73.9 gigawatts.

This year’s PV demand growth will be nearly flat for the first time after years of expansion. Also, the ranking of the top three regional solar markets will likely change this year, with India having the opportunity to displace Japan to become the world’s third largest.

“While China remains the largest regional market, its domestic PV installation target for this year is slightly lower than last year’s according to the latest government announcement,” said EnergyTrend analyst Celeste Tsai. “As for the second-place U.S., the country’s current political climate is not conducive to the growth of its PV market. At the same time, Japan will continue to lower its feed-in tariff rates over the next few years. Because India still maintain strong demand for PV products, it has the potential to overtake Japan to become the world’s third largest solar market by taking at least 14% of the year’s total PV demand.”

India’s cumulative grid-connected PV installations officially surpassed 9 gigawatts at the end of 2016, according to the country’s Ministry of New and Renewable Energy (MNRE). Furthermore, the Indian government has announced the bidding results for the building of the country’s and the world’s largest PV power plant – Rewa Ultra Mega Solar Project. Scheduled to begin operation in 2018, Rewa Ultra Mega Solar Project will make a huge contribution to India’s utility-scale PV demand.

Tsai pointed out that policy remains an influential factor in the long-term development of India’s PV market. “Currently, solar products in some areas of the country are exempted from sales taxes, but the government has yet to decide the rate of Goods and Services Tax (GST) that will be applied on them,” Tsai explained. “GST, which was approved by the parliament last year, could pose as an enormous financial burden on the future construction of PV power plants in India and stifle the growth of the country’s solar market.”

MRNE made an assessment on the impact of GST on the domestic solar market and estimated that some solar products can be subject to a rate as high as 20%. This in turn will drive up costs across the domestic PV supply chain and raise levelized cost of electricity for PV power generation by 13~15%.

Tsai also stated that irrespective of the GST rate, an installation rush is expected to take place in India during the first quarter before April, when the nation-wide sales tax is officially implemented. This wave of urgency to install PV systems will be the main demand driver for the country’s solar market for the first quarter.

EnergyTrend expects that India will add at least 10 gigawatts to its domestic PV installations in 2017, allowing the country to overtake Japan and become the third largest solar market in the world.