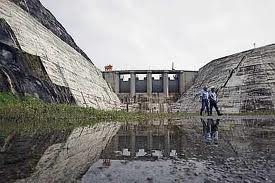 Nonetheless, it acknowledges that its construction processes it implemented was not in accordance to  correct procedures.
NGOs have alleged that Sinohydro, a Chinese state-owned enterprise China's biggest dam builder, improper construction practices in the dam were widespread and pose concerns for its future safety.

Malaysia-China Hydro, a joint venture between Sinohydro and Malaysian firm Sime Engineering, is the biggest contractor engaged in building the dam, which will be Malaysia's largest when it is completed next year.
The Sarawak Report by  environmental journalist Clare Rewcastle alleged the practice of adding excessive water to cement, regarded as unsafe by the construction industry, was endemic in the building of the dam.

"It is well-known that the Chinese contractors were under extreme pressure from the Malaysian government during the period up to 2009 to get the dam finished as quickly and cheaply as possible, after a series of delays and cost overruns," the Sarawak Report said.
"It's all supposition," a Sinohydro spokeswoman was quoted saying after seeing the video and photos. "The pictures show workers washing the silo of the machine. We can admit the cleaning process is not correct and doesn't follow instructions," she said.

Raymond Abin, national co-ordinator of the Sarawak Conservation Alliance for the Natural Environment, said: "The unsafe practices outlined by the Sarawak Report are true. The group is fighting dam construction in Sarawak, one of two Malaysian states on the island of Borneo."