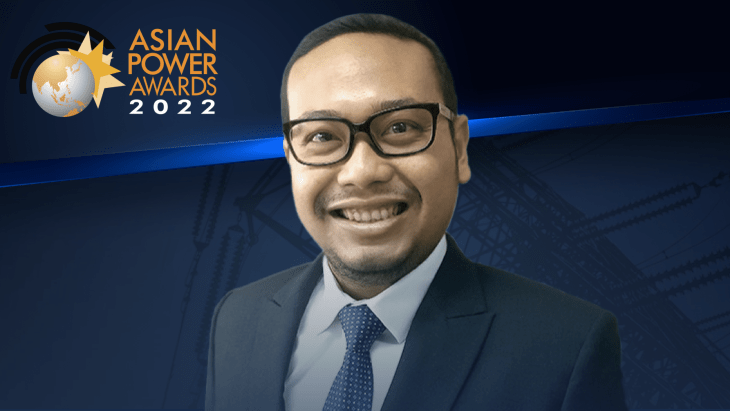 Gervasius Samosir highlighted that energy demands, population, and economic growth prospects are amongst the main drivers for its acceleration.

Gervasius Samosir is a Partner at YCP Solidiance, a management consulting firm based in Jakarta, Indonesia. He has over 10 years of experience across various industries such as power and energy, digital, banking, and TMT.

He has authored several industry reports with YCP Solidiance, including one on the adoption of electric vehicles (EV) in Indonesia, and has provided insights for noted local and regional publications about his experience with the energy industry.

Samosir previously worked for strategy consulting and market research firms, where he led several projects with leading companies in ASEAN. He has also supported large multinational organisations, mainly within the domains of market entry, growth strategy, and business transformation and implementation projects.

Asked about his insight on the acceleration of renewable energy in the coming years, he said that the rising energy demands, rising populations, and strong economic growth prospects would be key reasons for the new renewables wave in Asia. The partner added that solar and wind are projected to be the main areas for renewable energy in Asia.

Samosir sat down with Asian Power to discuss the trends in the adoption of renewable energy, challenges to the development of such projects in Asia, as well as his expectations for the entries in this year’s Asian Power Awards.

What trends have you observed in the adoption and deployment of solar PV in Asian markets, particularly in Indonesia?

Solar PV is one of the most mature renewable energy technologies. Every year, we are seeing a cost reduction in the use of Solar PV. Solar panels are getting cheaper and cheaper, making this technology closer to mass use. We hope global financial institutions are ready to fund Solar PV projects in Indonesia since, geographically, Indonesia is on the equator line and electricity demand is relatively high. Indonesia has the highest energy demand amongst ASEAN members, and fossil fuel resources still dominate Indonesia’s energy and electricity mix: less than 12% of Indonesia's primary energy supply was from renewable sources, and renewables only provided approximately 14.9% of Indonesia’s electricity generation in 2020. Currently, Indonesia is growing slower than Thailand and Malaysia in terms of Solar PV adoption. Our main problems are our policies and regulations. We do not have attractive incentives and funding compared to other ASEAN countries. We need to explore more funding initiatives, such as power purchase agreements with PLN and many others. Recently, we have also seen many

Solar PV startups rising in Indonesia, such as Xurya and Sun Energy. They are able to install solar panels with and without investments and have cooperated with large Indonesian corporations.

What’s the outlook for the solar PV market in Asia?

Solar PV is one of the fastest-growing sources of energy globally, and Southeast Asia is becoming one of the fastest-growing solar energy markets and one of the most promising regions in the global expansion of the solar photovoltaic industry. The increasing need to reduce greenhouse gas emissions, the growing power demand, and the need for energy independence and security are some of the major factors that accelerated the adoption of rooftop solar PV. The Asian market currently accounts for 41% of global energy demand and 45% of global power generation. Asia will be one of the strongest regions for the solar PV market since we have seen continuous cost reductions in solar PV installations in recent years. We also see that policymakers across different countries in the region have been intensifying their efforts to ensure a secure, affordable, and sustainable pathway for the energy sector, which includes activities to facilitate investment in solar power generation and infrastructure. Currently, China, Japan, and India are the top three Asian countries with the biggest cumulative solar photovoltaic capacity, respectively.

What recent developments have your clients been working on? Any trends that you have noticed or would like to share with us?

Global energy corporations are looking at sustainability as no longer an option but a necessity. For example, our state-owned energy firm, Pertamina, is looking for a massive investment in energy transition. They set the energy transition programme as the company's top priority, which includes eight strategic initiatives such as green refinery development, bioenergy development, hydrogen commercialisation, gasification, battery ecosystem initiation, integrated energy storage, and increasing geothermal installed capacity. A few other clients are also promoting carbon capture and storage in Southeast Asia. Carbon capture and storage offers an opportunity for balancing economic growth and continued fossil fuel use with emission reductions. Indonesia, the Philippines, Thailand, and Vietnam are the four fastest-growing economies in Southeast Asia that are aware of rising greenhouse gas emissions and have begun to make concerted efforts to reduce emissions through domestic action and international climate negotiations. In the downstream market, we have seen many players enter the Asian market for both EV 4-wheelers and 2-wheelers. We have seen the evolution of business models further implemented and scaled up to profitable schemes.

How can the adoption of renewable energy be further accelerated this year? What RE sector has the most potential to grow in the region?

The adoption of renewable energy will be driven by the emerging EV ecosystem. India and Indonesia will become the second- and third-largest E2W markets in the world after China, growing at more than 60% annually. The rapid development of mature EV markets is supported by strong policy actions on four fronts: official EV targets; restrictions on ICE production and sales; consumer incentives; and support for EV charging infrastructure (EVCI). The transport sector is one of the largest sources of greenhouse gas emissions, so the progress of EV adoption will be pivotal for meeting the climate change challenge in Asia. We could expect EV adoption to reach 45% under currently expected regulatory targets.

As a judge in the Asia Power Awards, what projects or innovations are you expecting to find amongst the entries?

I’m looking forward to seeing more innovations in operational efficiency improvements in non-renewable energy. I’d like to see innovations in how our current energy can be produced with lower CO2 emissions. The leverage on carbon credit and carbon capture initiatives to be embedded in the current non-renewable power market.

In terms of renewable energy development, it is also interesting to find out the best case scenario for energy transition. I want to see a potential business model that makes renewable energy scalable and more bankable (its ability to attract investments). It is interesting to see what kinds of business models investors think are scalable and profitable for medium- and long-term investments.

Besides that, initiatives related to the circular economy are also interesting. The idea of a circular economy is simple: to make better use of resources, close loops of resource flows by fully recovering materials instead of wasting them, and prevent waste and pollution by better design of products and materials and keeping them in use for longer. A sustainable circular economy involves designing and promoting products that last and that can be reused, repaired, and remanufactured. We have a lot of potential here, such as using biomass, i.e., using cow dung to make new biogas/compressed natural gas (CNG) and to be converted further to power.