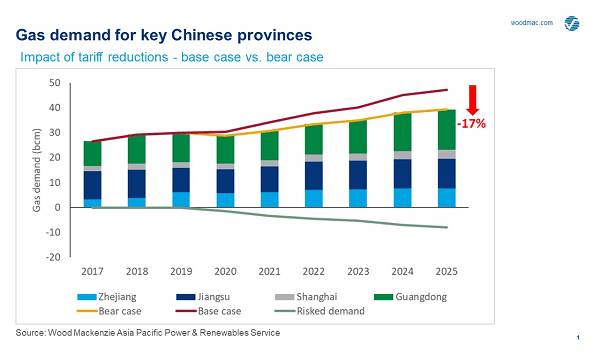 The anticipated recovery in gas prices beyond 2022 is said to hurt the economics of gas-fired generation, according to Wood Mackenzie Asia Pacific Vice Chairman, Gavin Thompson.

Asia is the engine of global gas demand growth, with consumption expected to rise by an average of just under 3% a year over the next two decades. Gas demand is expected to double in China and India by 2040, with its cleaner burning credentials critical to tackling both countries' twin challenges of urban air pollution and carbon emissions.

Power generation is an important part of this, and current low gas prices are supporting demand growth in the sector and encouraging pro-gas policies and infrastructure developments. Shifts in contracting terms are also encouraging gas use, as lower levels of oil indexation reduce gas prices through the medium-term compared to historical averages.

However, new coal plants continue to be developed across the region, whilst wind and solar capacity is booming.

In China, gas power plants are struggling after tariff cuts intended to improve manufacturing competitiveness as trade tensions rise. India’s consumers are more price sensitive than ever as the country looks to rebuild from the chaos of the pandemic.

Given these risks, power sector gas demand in Asia is expected to be squeezed between low cost coal plants and increasingly abundant renewables.

The electrification of Asia is also underway. From just over 3,000 GW currently, Asian power generation capacity will rise by a further 1,000 GW by 2025 and with renewables generation costs expected to fall by a further 30% by 2030, gas-fired power will continue to cede competitiveness.

Coal capacity across Asia is also rising and is said to make up almost 30% of all Asia’s additions by 2025 compared to only 12% for gas.

Amidst rising trade tensions, China is seeking to boost manufacturing competitiveness by reducing electricity costs. Regulated gas-fired power tariffs have been cut by up to 28% in key provinces since June.

“If tariff cuts are maintained, we estimate up to 8 bcm of gas demand from power could be at risk in 2025,” said Gavin.

Meanwhile, gas generation has increased at the expense of coal in India’s power sector this year. However, the power sector’s appetite for gas will be at risk as LNG prices begin to recover, and much of the future growth from India’s domestic gas production just looks too expensive for the power sector.

India is a coal-fired nation with over half of all capacity and 70% of electricity generation comes from coal. Investment in new coal-power projects has been hit hard but is expected to recover as reforms deepen and demand improves. India will add a further 26 GW by 2025.

“Despite concerns, I am cautious not to overplay the risks of a squeeze to Asian gas demand. Gas’ role in emerging Asian economies is irreplaceable in supporting policies to control emissions and air pollution,” said Gavin.

China and India are said to recognise this and will look to balance competitiveness with sustainability. Firm targets are being set for gas penetration, policies bolstered to support displacement of coal and emissions trading systems are being developed, albeit too slowly.

Both policy and investment in support of gas are being directly influenced by the current low prices, more so than just 12 months ago. This gives power sector gas investment a tremendous window of opportunity, particularly as prices are expected to recover beyond 2022.

As prices rise, it will be increasingly critical that Asian governments continue to support gas demand, pursuing economic recovery in parallel with, not in preference to, addressing emissions.