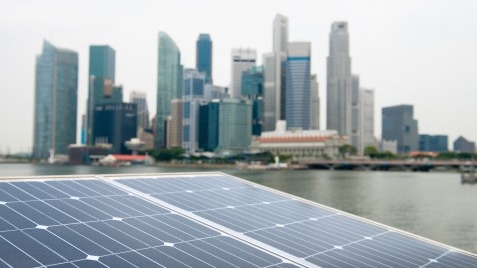 How Thailand fares in its quest for net-zero?

Thailand has installed a renewable energy capacity of more than 15 GW.

An increasing commitment to renewable energy has Thailand on course to become a sustainability success story within Southeast Asia – but it wasn’t always this way. Kudun and Partners analyses how Thailand fared for the last few years. They noted that in 2010, 90% of Thailand’s electricity supply came from coal and natural gas. By contrast, just 2% came from renewable sources.

According to an analysis report by Kudun and Partners Ltd., the Thai government introduced a series of initiatives starting 2007, which is aimed at increasing renewable energy production. Incentives were handled by the Electricity Generating Authority of Thailand (EGAT), which is committed to purchasing renewable energy from small producers within the country.

Further, the analysis pointed out that by 2014, there were other reasons to move toward renewable energy in Thailand. Natural gas production began decreasing that year due to waning supplies, forcing Thailand to re-think a large swathe of its energy mix. The country could make up for the shortfall, either by importing substitutes or by increasing its investment in domestically produced renewables.

Kudun and Partners’ analysis report noted that the main focus of the plan is on solar and bio-energy because of the suitability and ease of production for these energy sources in Thailand. The country’s tropical location makes it an ideal place for the development of solar energy, as the country receives a large amount of solar radiation throughout the year. As for bio-energy, Thailand’s economy is heavily based on agriculture, leading to the production of large amounts of agricultural and municipal waste that could be converted into usable energy.

With this, combined approaches to electricity generation have also proven to be successful. Kudun and Partners represented B. Grimm Power Public Company Limited and Energy China Engineering Group Shanxi Electric Power Engineering Co., Ltd. Consortium in their ongoing development of the world’s largest hydro-floating solar hybrid power project with the capacity of 45 megawatt located at Sirindhorn Dam and created with cooperation from the EGAT, the project is worth over THB842m (approximately US$27m).

Thailand’s move toward sustainable energy independence comes at a crucial time. The analysis report states that electricity demand in the Asia-Pacific region is increasing at twice the global rate, putting it on track to double by 2040. Mindful of the increasing demand for power, yet determined to lower greenhouse gas emissions by 20.8% by 2030, the Thai government has expanded its system of incentives for green energy producers. Tax breaks, feed-in tariffs, easier access to financing, bidding programs, metering schemes, the Blockchain-based peer-to-peer trading of electricity generated by solar energy, and a biomass-centred, community-centred power generation program called Energy for All are amongst the government initiatives aimed at boosting green energy production and use. Currently, Thailand has installed a renewable energy capacity of more than 15 gigawatts (GW), and it is forecasted to rise to over 60 GW by 2037.

Meanwhile, renewable energy production continues to increase. Over the past decade, wind power production in Thailand experienced an average annual growth of 89%, with the increase in solar power production close behind at 83%. Of course, such rates cannot be continued in perpetuity; solar power is expected to grow by "just" 10% each year until 2030, whilst wind power is unlikely to increase much in the near future, says Kudun and Partners Ltd.

Overall, however, renewable energy production remains a growing sector that will remain very much in demand moving forward. From biomass feedstock and battery technology to digital systems that enable energy trading, and other elements of an advanced green energy economy, business opportunities in this industry remain plentiful nationwide, the analysis report said.