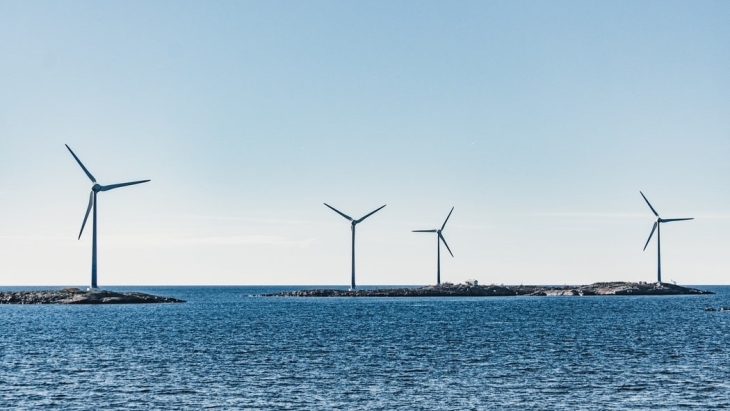 Long overlooked by the market, offshore wind farms are finally in the limelight as the country pledges carbon neutrality by 2050.

In the cold waters off the coast of northwestern Japan, a stone’s throw from the ancient port city of Akita, a wind farm project of historic proportions is rapidly taking shape. Here, construction is in full swing for the country’s first large-scale offshore wind farm, the 140-megawatt (MW) Akita Noshiro offshore wind project.

Japan had long ignored its offshore wind potential, with developers discouraged by perceived technology risk and administrative challenges. But the offshore wind sector was suddenly propelled into the limelight when the Japanese government unveiled its goal of net-zero emissions by 2050.

At present, Japan only has two commercially operating offshore wind farms, with a combined capacity of around 4.5 MW. This is a far cry compared to its East Asian neighbours—China, for instance, added 2.5 gigawatts (GW) of offshore wind capacity in 2019 alone. But Japan is boosting the share of renewables in line with its carbon neutrality goal; and offshore wind plays a crucial role. The government has set initial generation targets of 10 GW by 2030 and 30 GW to 45 GW by 2040.

“The two wind farms of the ¥100b Akita project will generate with a capacity of 140 MW, enough electricity to power at least 150,000 of Japan’s 52 million homes. By 2030, Japan plans to have installed a total of 10 GW, and the country’s possibilities are even greater,” noted Katsuhiro Sato, Partner, Tokyo, at McKinsey.

Figures from the Renewable Energy Institute (REI) show that there are currently projects totalling around 18 GW which are at the stage of environmental impact assessment. Most large-scale projects are concentrated in the waters of Akita and Aomori prefectures.

“For Japan, surrounded by the sea, utilizing offshore wind power is highly significant and an urgent necessity. Japan is second in the world in the deployment of solar photovoltaics (approximately 62 GW as of end-2019), so wind power, which generates electricity whether day or night, needs to be accelerated to create a balanced renewable energy mix,” the REI said in a report. “Deployment of renewables on a large scale is what will enable Japan to achieve carbon neutrality by 2050; and offshore wind power, which tends to be large in scale and has relatively high capacity factor, will be one of Japan’s primary energy power sources,” it added.

However, experts caution that Japan’s path to offshore wind dominance will be anything but smooth sailing. “Japan’s journey will require multiple players, including regulators, utilities, and investors, to do their part in a country where the public remains sceptical about offshore wind’s cost competitiveness with other power sources,” Sato noted.

Geography is also an issue in scaling up offshore wind production. “Offshore wind looks promising and should certainly be explored, but Japan’s wind geography is not as fortuitous as some regions, such as the North Sea which has a 20 percent higher annual utilisation ratio,” noted Jun Arima, Senior Policy Fellow on Energy and Environment, Economic Research Institute for ASEAN and East Asia (ERIA).

REI further warned that Japan’s coasts have many areas where the water gets deep almost immediately, which poses a challenge in bottom-fixing platforms. Seabeds may also be impacted by earthquakes, which means floating platforms moored to the seabed with lines are expected to be utilized.

“Japan has the additional challenge of needing floating platforms for a majority of the sites because of its deep coastal waters, as well as turbines that can withstand earthquakes and typhoons and make use of low wind speeds,” Sato concurred.

Supply chain issues must also be addressed to help offshore wind truly take off domestically. REI highlights that Japan has no local turbine manufacturers, and most components have to be imported from other countries. This translates to higher costs, which may hobble the sector’s growth in the long run.

“The supply chain is not only for turbines and their components. Turbine assembly, construction work for installation, and post-launch operations and maintenance are indispensable to offshore wind power projects. A supply chain strategy is needed that considers the enhancement of the supply chain in this broad sense. Building a supply chain that Japanese companies take part in can be expected to have major economic ripple effects, create many new jobs, and benefit the local region,” the REI said.

Despite these challenges, analysts are optimistic that increasing offshore wind production is crucial in securing Japan’s future energy supply. Sato highlights that all these challenges are surmountable through rigorous stakeholder alignment, coherent market design, and supportive regulatory and financial conditions.

“The country is on the cusp of joining the global offshore wind scale-up club at the most opportune time in the industry’s history. Japan has good reasons to pursue offshore wind energy and has picked an opportune moment to join the international scale-up club,” he said. “Not only does developing offshore wind offer a way to stimulate the economy in one of the most severe global downturns in living memory, but also the industry itself has made great strides across the globe since its inception in Denmark in the 1990s,” Sato noted.

“Many of the country’s unique challenges are also its greatest opportunities. Offshore wind offers Japanese companies the chance to become international leaders in the design and construction of technologies that address some of the island’s challenges. These technologies include floating foundations and turbines that can withstand typhoons, tsunamis, and earthquakes, as well as those that can operate efficiently at low wind speeds. These new technologies can be installed at home and exported to countries with similar conditions to Japan, such as China, South Korea, and the Philippines. Japan could become an industry leader in developing the technology and processes needed in deep water and challenging wind conditions,” he added.

The long road to carbon neutrality

Offshore wind is not the only sector that will benefit from Japan’s Green Growth Strategy. In the short term, the government is further looking to expand the share of solar power; in the long term, it targets the use of new technologies such as hydrogen and ammonia generation.

“The government counts on an ambitious expansion of renewables, a recovery of nuclear power and on the deployment of new technologies, including low-carbon hydrogen, safer advanced nuclear reactors and carbon recycling to decarbonise the electricity sector,” the International Energy Agency (IEA) said in a report. “The strategy sees renewables accounting for between 50% to 60% of electricity demand in 2050 with the remainder supplied by nuclear and thermal plants with carbon capture utilisation and storage (30% to 40%) and 10% of hydrogen and ammonia generation.”

In particular, hydrogen will play a prominent role in Japan’s clean energy transition. The country aims to have 800,000 fuel cell vehicles and 5 million residential fuel cells by 2030. Researchers are also experimenting with large-scale power generation based on hydrogen.

While there are still calls to phase out nuclear power, the sector plays a crucial role in Japan’s 2050 targets. Nuclear energy is expected to increase to at least 11% of the total primary energy supply (TPES) by 2030, up from 4% in 2019.

“Japanese energy policy debates after 3/11 have been distorted by a dichotomous argument between renewables or nuclear. Reality calls for a more pragmatic approach that incorporates both and makes use of their respective advantages. Together with renewables, Japan should accelerate the restart of nuclear power plants in the short- to mid-term. The construction of new and more advanced nuclear plants should be an option for the 2050 carbon neutrality plan. It is also crucial to preserve and develop Japan’s nuclear power technologies and respective human resources,” said Arima of ERIA.

Moreover, despite its ambitious targets, Japan remains heavily reliant on imported fossil fuels. Data from the IEA show that in 2019, fossil fuels accounted for 88% of TPES, the sixth highest share among IEA countries. Fossil fuels will also account for more than half of power generation in 2030.

As Japan phases out old coal-fired power plants, experts warn that the country may face an electricity generation gap. “The significant reduction in Japan's thermal power generation capacity, which comprises about 70% of its energy mix, could threaten the country's power supply during high demand seasons without a significant boost in the utilization of the baseload generation source, which is currently nuclear power,” S&P Platts said in a report.

The IEA cautions that the government should develop scenarios on how to close an eventual gap in electricity generation if restarts of nuclear plants are delayed. “Achieving the aim of carbon-neutrality by 2050 will require Japan to substantially accelerate the deployment of low-carbon technologies, address regulatory and institutional barriers, and further enhance competition in its energy markets. It will also be important to develop different decarbonisation scenarios, to prepare for the possibility that certain low-carbon technologies, such as nuclear, do not expand as quickly as hoped,” the IEA added.

“There is no perfect energy setup. Japan’s reality does not allow it to count on one or another energy source while ruling out other options. Seeking the best diversified mix is the right answer, and it is time for Japan to return to this pragmatism in its energy debate,” Arima concluded.