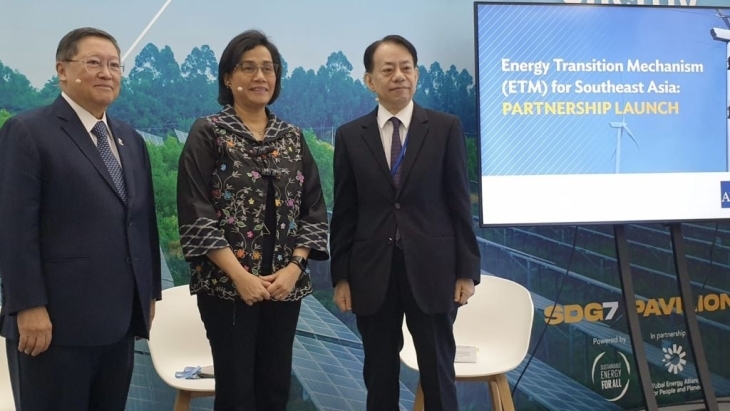 The ETM Southeast Asia partnership is the first of its kind in Asia and the Pacific.

Asian Development Bank (ADB) President Masatsugu Asakawa, Indonesian Finance Minister Sri Mulyani Indrawati, and Philippine Finance Secretary Carlos G. Dominguez announced the launch of a new partnership to establish an Energy Transition Mechanism (ETM) in Indonesia and the Philippines. They made the announcement at the COP26 summit on 3 November.

The partnership was endorsed by senior cabinet-level officials from Denmark, the United Kingdom, and the United States, as well as leading global financial institutions and philanthropies. Vice-minister for International Affairs Masato Kanda announced Japan’s Ministry of Finance committed a grant of $25m to ETM, the first seed financing for the mechanism.

"ETM is an ambitious plan that will upgrade Indonesia's energy infrastructure and accelerate the clean energy transition toward net-zero emissions in a just and affordable manner," said Indrawati.

“A clean energy transition in the Philippines will create jobs, promote national growth, and lower global emissions," added Dominguez. "ETM has the potential to accelerate the retirement of coal plants by at least 10 to 15 years on average."

Energy demand in Asia is set to double by 2030, and Southeast Asia is one of the regions continuing to build new coal-fired capacity. Some 67% of Indonesia's electricity and 57% of the Philippines' power generation comes from coal. Indonesia has committed to reducing emissions by 29% by 2030 and achieving net-zero emissions by 2060. The Government of the Philippines recently announced plans to place a moratorium on new coal-fired power plants.