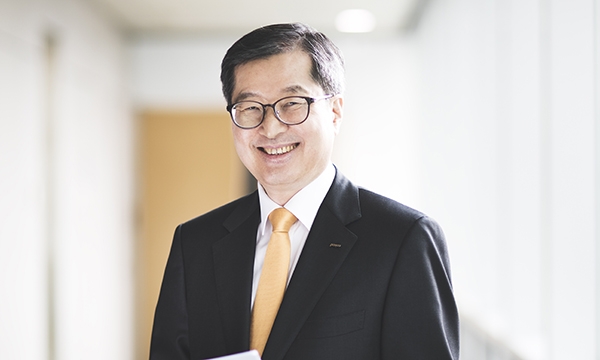 South Korea’s largest private energy producer POSCO Energy is bent on making bigger leaps in the renewable energy space as president & CEO Park Ki-Hong explains in this exclusive interview with Asian Power. He was appointed as the CEO of POSCO Energy in March of this year.

What are your top three priorities for POSCO Energy’s generation side?
Just like the global energy market, Korea’s energy market is encountering a wide variety of changes. In the past, the main focus of power policies was economic feasibility. Now, a shift is being made to energy policies that take into account safety as well as our environment. As Korea’s first and largest private power producer, POSCO Energy has been providing a steady supply of power to Korea’s metropolitan area. Since we are at a turning point, we need to make strategic changes to make a leap to the next stage.

Based on POSCO Energy’s 50 years of expertise in power generation, we have secured global competitiveness through projects in Indonesia and Vietnam. In addition to the current power generation business, we plan to advance into the gas business of directly importing LNG and plan to establish a smart solution through a smart grid,  in order to become a ‘global, ecofriendly energy company specializing in Gas & Power’.

In order to achieve this goal, POSCO Energy will do the following:

First, to be in step with global, eco-friendly energy development, we will actively engage in developing new & renewable IPP projects. In Korea, we will focus on developing regional floating photovoltaic projects as well as utility-scale solar photovoltaic projects centering around industrial areas and regional unit. Also, we will continue to develop business and increase operation knowhow through the off-shore wind power generation projects in Jeollanam-do Shinan.

Based on the experience we gather in Korea’s new & renewable energy business development and operation, we will actively engage in pursuing overseas IPP projects. Second, we will expand the gas business related to power generation. A collaboration system will be established between POSCO Energy’s gas generation business and POSCO’s LNG terminal in Gwangyang to build a business with internal stability.

What is POSCO Energy’s biggest plan to date on the generation side — any plans of new plants, investment in other plants in other countries, etc.? What should the industry be excited about? How do you plan to achieve these?
Within Korea, a 2,100MW ultra super critical coal-fired power plant in Samcheok, a 300MW wind power generation plant in Jeollanam-do Shinan and a variety of photovoltaic power generation plants, including floating types, are in progress. In addition to the 3.4GW LNG power plant in Incheon that we are currently operating, we are also considering to develop other additional LNG power generation projects.

In parallel with these efforts, we are looking into additional project biddings with various Global IPP players that we are collaborating with and we are anticipating that there will be promising results shortly.

What do you think is South Korea’s biggest energy problem at the moment and how should this be addressed?
The biggest risk in Koreas’ electric power industry is the fact that the power demand has reached a plateau. Moreover, due to the NIMBY (Not in My Back Yard) phenomenon, there are significant difficulties in constructing infrastructure such as power plants, transmission & distribution systems, etc.

Especially, in the power generation section, there are growing concerns that the volatility in electricity exchange will become greater. Therefore, the market system should be improved to allow the power purchaser (KEPCO) and power supplier (power producer) to avoid the risks related to the fluctuation in electricity trading price.

In other words, the time has come for us to change the electricity market’s price determination method from a Cost-based Pool (CBP) to a price bidding method. If there are concerns about making an immediate change, it could be introduced gradually by implementing safety mechanisms such as price limits.

Moreover, we need to supplement market function so that it can respond to the future changes that will take place in the power industry. Measures should be taken so that the market can respond to the tasks given by energy policies, such as responding to environmental issues and increasing new & renewable energy. Also, in order to build a more flexible electricity market, we need to expand policies on evaluating the cost of greenhouse gas, limiting CO2 emission, etc.

What has been the experience of POSCO Energy’s international investments and what are your sweet spots?
POSCO Energy’s first overseas investment was a joint project in 2010 with AES, a U.S. based company, for Mong Duong 2, a 1,200MW coal-fired power plant in Vietnam.

Afterwards, there was the 200MW PT. Krakatau off-gas power generation project that was commenced when POSCO started the construction of its integrated steel mill in Indonesia. This project was completed in 2014.

There was also a joint project that began in 2015 for a 300MW thermal power plant in Botswana, which was one of POSCO Energy’s main overseas investments. In addition to this, we have worked closely with Global IPPs in bidding projects in the Middle East, South America, etc., so we have acquired the ability required for overseas IPP projects.

The earlier stage of POSCO Energy’s overseas business was focused on Asian countries such as Vietnam, Indonesia, and Mongolia etc. where POSCO group had already set up an overseas network. Now, based on our competitiveness, we are not only targeting Asia, but also expanding our target to the Gulf Cooperation Council (GCC) countries in the Middle East and Africa.