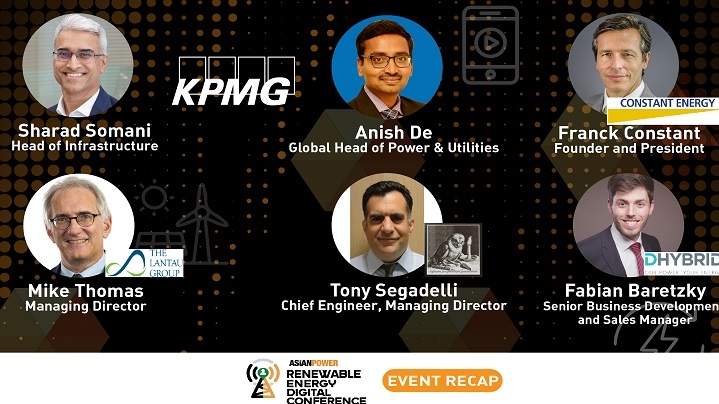 Industry leaders discuss the future of renewables in APAC

The trend is pointing towards achieving 100% renewables in many countries, but it will take time.

The topic of switching to renewable energy is becoming more than just a viable plan to cut costs and to contribute to alleviating the adverse effects of climate change. Leaders weighed in last 17 June 2021 during the “Asian Power Renewable Energy Digital Conference 2021” on how different industries are making a move to renewables to keep abreast of the changing times.

“The electricity industry’s heavy reliance on fossil fuels has been the key reason why it is one of the leading contributors to greenhouse gases. With the zero targets being set by countries and corporations, the electricity industry is coming under greater scrutiny and the business models are getting redesigned to make renewable, clean green power as the central theme,” said KPMG Asia Pacific Head of Infrastructure Sharad Somani.

Somani said that this highlights the consumers’ requirement of having holistic energy as a solution that is green and sustainable. Regulators and governments take an increasingly strict view of the industry whilst the consumption load patterns are changing, as the cost of renewable energy is drops and a more modular approach to electricity generation and disruption become possible.

“Most utilities have started to focus on the altered business models, understanding the convergence play and deciding how best to leverage the available and emerging technological solutions. Other industries have been disrupted beyond recognition. It is time for utilities to think about how to develop a sustainable business model both environmentally and economically,” he added.

Constant Energy Founder and President Franck Constant said that this is a development not just in the Asia Pacific region, but a matter being widely adapted globally.

“More and more companies will be faced with constraints on reducing carbon emissions, either by regulation, by public opinion, or by consumer pressure all around the world. This is now a global issue. We are all affected by climate change and CO2 reduction is one of the key tools as the industry moves on to the market in Southeast Asia,” he said.

Batteries to aid the move to solar

Necessary in the discussion in the move to using solar energy is the utilization of batteries, either as back-up or generally for use during the nighttime. Whilst installation of solar panels in different industries is now slowly gaining momentum, the topic of batteries will still take some time.

“We can not take the gas completely out of the equation by any stretch and anytime soon. But still, the best use case for batteries is for ancillary services and frequency control. Ideally you get the longer duration storage to cover the night time, but we're not really there yet,” said The Lantau Group Managing Director Mike Thomas.

“Remember, batteries kind of charge and discharge, which means you've got to find a time to charge. You have to put a lot of solar to take that daytime price down. We've got some time before the future gets here. These are the risks that investors have to be concerned about,” he added.

One of the drivers that are pushing companies to move to using renewable energy is to ensure a good relationship with their consumers. By reassuring their consumers that their products were manufactured sustainably, they are able to keep their existing consumers and attract new ones.

“It's a combination of reasons, one is that costs are lower. But we do have one of our clients that has specified that they must have 100% renewable energy. They're a jewelry manufacturer and they market their jewelry by saying it is sustainably produced,” said OWL Energy Chief Engineer and Managing Director Tony Segadelli.

Segadelli said that rooftop solar units became more attractive because it is low-cost, especially comparing it to prices observed years ago.

“For rooftop solar units, anywhere from 75 to 90 cents per watt per hour. Five years ago, that would have probably been in the range of US$1.50, maybe slightly more. These are set to still come down quite significantly, but it is starting to taper off to an extent,” he added.

While the development of this type of energy will take a couple more years, the potential is big. Remote areas and islands that have yet to have stable electricity are some of the places where solar may find room for continued growth.

“What we see mostly is the electrification of previously unserviced spaces. We are talking about Indonesia, talking about the Philippines —lots of islands have no reliable electricity. So they have a lot of players there that want to bring reliable and affordable electricity to those places, with the help of renewables with solar plus battery, and maybe with a backup diesel,” said Fabian Baretzky, Senior Business Development and Sales Manager of DHYBRID Power Systems.

For businesses interested in shifting to solar, Baretzky said that the common estimate they have for ROI on solar is around two to five years.

“Clients will not tend to go for solar or even solar hybrid systems if the payback period is beyond five or six years. What we typically see when we execute projects, clients go for hybrids or for the solar systems with a payback period of below five years, so a safe estimate is around two to five years,” he said.

Hydrogen’s bigger role in the future

Another topic that became of interest to attendees of the conference was the potential of hydrogen as a source of energy in the future.

KPMG Global Head of Power & Utilities Anish De said that investments are coming for hydrogen, and it is becoming another viable option for alternative sources of energy. Whilst the progress is more prevalent in the West, the coming decades will most likely see a similar trend come into APAC.

“If you look at it in countries across the world, there's a lot of money especially in Europe and it's going to be starting in America as well. There's a lot of money going into research into green hydrogen and this is going to be a trajectory. Green is the eventual point where we have to go especially if we have to meet the global decarbonisation needs and targets,” he said.

“The target date for green hydrogen to become viable is around 2050 or earlier, but now that we have seen with the kind of money going in and the cost of renewables coming down at scale in Europe, Asia, China, India, and also in America, I think we are going to see a much more accelerated pace of green hydrogen. The more recent prognosis is that 2035 to 2040 we are going to see hydrogen come at scale and will have the intermediary forms seeding the market,” he added.

Anish said that hydrogen is an essential part of the whole mix because electrification only touches a part of the decarbonisation journey on the demand side. Hydrogen needs to come in and play at a large scale.

Thomas added that hydrogen will play a bigger role eventually as the push against coal becomes more highlighted in the future.

“Through this, you start getting the full, integrated energy smarts, where you see the industrial processes, the behind the meter, the signals, the heating, all stars interplaying and meeting some interaction with the rest of the energy market, because it's a stack proposition. We're still early, but if you're in Japan or Korea, or if you're thinking about China, it's just a matter of time,” Thomas concluded.