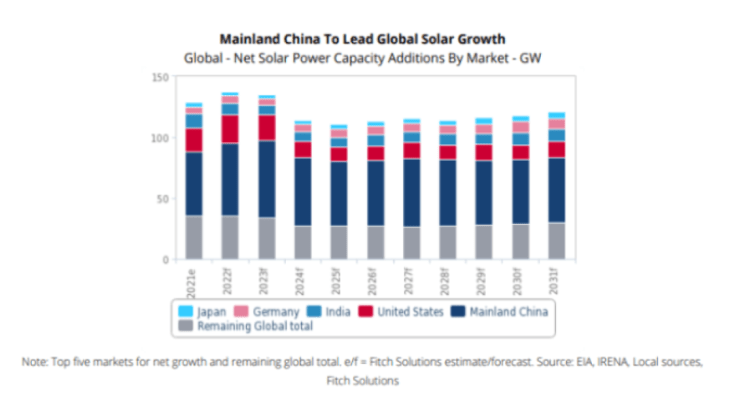 Asia to account for over 60% of global solar growth

Solar capacity in the region will grow by about 760GW from now to 2031.

Solar power will be the “dominant” power sector growth driver globally, expanding by 143% between 2021 and 2031, with the Asian region accounting for more than 60% of the additional capacity until 2031, according to Fitch Solutions.

In a report, Asia and the North America and Western Europe region will drive the growth in solar and will account for over 90% of the global net solar capacity additions, Fitch said.

Most markets in Asia have committed to carbon net-zero goals such as Vietnam and Malaysia targeting 2050, Mainland China by 2060, India by 2070, and Thailand between 2065 and 2070.

This will help improve solar generation through production, driving down project development costs and improving the cost-competitiveness of the sector.

Discounting Mainland China, the North America and Western Europe region will be the leading in solar power investment in the coming years, with the sector expected to grow by 229GW between 2022 and 2031 in the region.

It said solar will make up 43% of all capacity additions globally, adding that the strong support for non-hydro power renewables globally will bring in investment for the solar sector as leading markets plan to diversify their energy mix and pursue long-term decarbonisation.