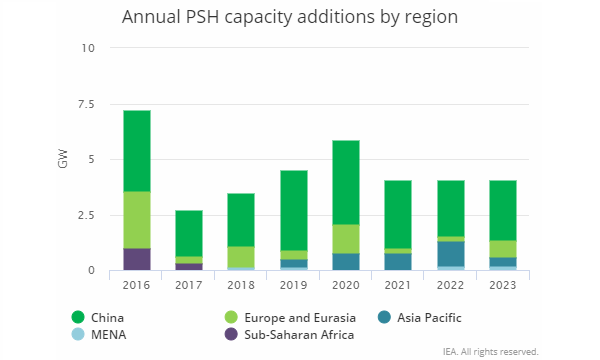 PSH development is being driven by China’s growing need for energy system flexibility.

China has surpassed Japan to become the country with the most pumped storage hydropower (PSH) after attaining 29GW of cumulative capacity, the International Energy Agency (IEA) revealed. It accounted for 78% or 2GW of the newly commissioned units.

According to an analysis, China is set to continue its growth and could install 18GW in the next five years to meet its 13th Five-Year Plan (FYP) target of 20GW by 2020. “The main driver for PSH development in China is the increased need for system flexibility, particularly to reduce wind electricity curtailment and optimise coal and nuclear plant operations,” IEA said.

Due to current regulations that consider PSH part of the transmission system rather than a generating asset, most PSH capacity growth is expected to come from China’s state-owned grid companies at sites earmarked in network expansion plans. “As such, the pace of PSH capacity expansion in the next five years will depend on the pace of project implementation and network upgrades by the grid companies,” IEA added.

The operating hours of PSH plants will depend on how grid operators decide to dispatch them in the most cost-effective way to optimise system operations. Historically, PSH plants have been under-utilised because previous tariff regimes failed to incentivise plant operation, IEA noted.

“As a result, capacity factors for the fleet were relatively low (6-8%) from 2010 to 2015. However, in 2016, the fleet average reached 14%, suggesting the potential for higher PSH generation over the next five years, depending on overall power demand, fleet profile and regional grid interconnectedness,” the agency added.

“However, financing new PSH projects and operating existing ones profitably remain key challenges, particularly in markets in which revenues from energy arbitrage are uncertain, grid fees exist, and/or remuneration mechanisms that value the system services provided by PSH are lacking,” IEA said.