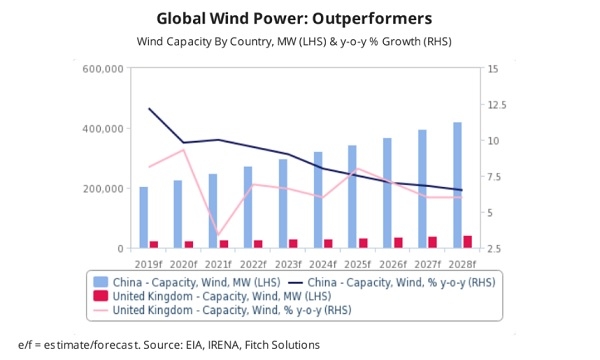 Its total wind curtailment has declined to 7% of total generation in 2018.

The outlook is based on the efforts in the market to reduce wind generation curtailment for the last two years, including the deployment of ultra-high-voltage (UHV) transmission lines connecting typically inland surplus power generation provinces with typically coastal power consumption hub provinces.

The total wind curtailment in the country has declined 10% since 2016 to 7% of total generation in 2018, and is expected to further reduce in the following years.

“Reducing supply curtailment is a key prerequisite to unlock subsidy-free wind power in the market, given that generators will require to be able to sell all the electricity they generate in order to make money when the rates they are offered are lower than those awarded under China's feed-in-tariff mechanism,” Fitch wrote.

Its inland provinces, particularly Inner Mongolia, Xinjiang and Gansu, are expected to become attractive to project development as curtailment rates continue to fall.

These provinces, which have driven China’s initial wind capacity growth boom, were noted to have been the most affected by grid bottlenecks.

“Project development in these provinces will support Chinese efforts to ensure wind power generation can compete on an even basis with coal in China, given that their favourable natural conditions and cheap land will support cost-competitive projects,” Fitch added.