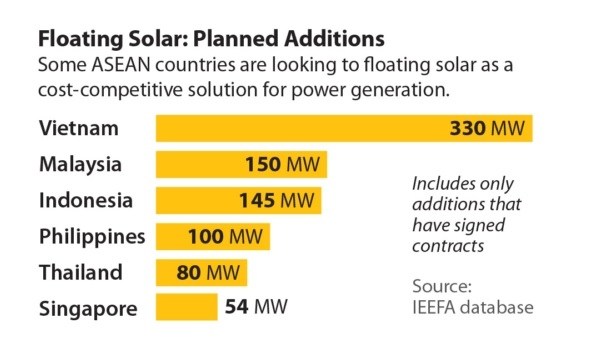 More ASEAN countries are building floating solar farms to produce electricity at prices that can compete with coal-fired power, according to a report from the Institute for Energy Economics and Financial Analysis (IEEFA).

Up to 2019, total installed capacity of FPVs among ASEAN countries was mostly below 1MW, until at least five countries in the region recently announced large-scale floating solar plans.

In Singapore, Cleantech Solar has completed a 9.8MW solar installation that included a mix of rooftop solar and 2.8MW of FPV on a water reservoir. Water utility PUB, meanwhile, procured 50MW of FPV on the Tengeh Reservoir with a targeted operational date of 2021. It is also in the process of implementing two 1.5MW systems on the Bedok and Lower Seletar reservoirs.

Malaysia’s Pestech also entered a partnership to jointly develop FPV solutions in the region, whilst in October 2019, a Chinese solar manufacturer secured a contract to supply 150MW of PV modules to power a floating PV park.

IEEFA stated that clean energy sources, such as floating solar power, can help insulate coal-importing ASEAN countries from the risk of volatile fuel prices and the expensive supply logistics of the global fossil fuels market.

Solar farms are found to be best when installed near hydropower facilities, where they can piggyback on existing connections to electricity grids. They can also balance out the peaks and troughs of consumer demand in complex electricity systems.

Floating solar installations could also withstand typhoons, powerful waves, and winds gusting up to 170 kilometres an hour, with offshore FPV now being tested by manufacturers.

“Water-borne solar installations are much quicker to build than fossil-fuelled power stations and can be ready in a matter of months,” says energy finance analyst Elrika Hamdi.