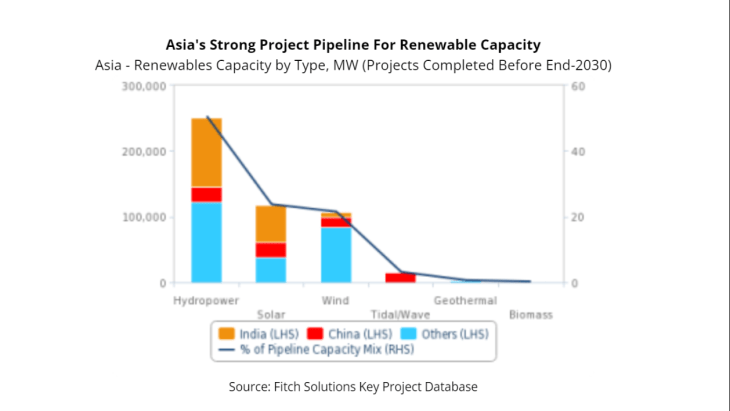 Nearly 250GW of renewables could go online in Asia by 2030

Asia’s strong project pipeline could get a boost from RE certificates.

A total of 249 gigawatts pf major hydropower and non-hydropower renewables is expected to go online across Asia by the end of 2030, Fitch Solution reported.

Of this, some 31% will be contributed by China, whilst the other 68% will be from India, according to its Key Project Database.

“We expect Asia to be a strong performer in hydropower and non-hydropower renewables, with robust capacity growth in the coming decade, increasing the supply of Renewable Energy Certificates (RECs) in the region,” Fitch said in a report.

RECs serve as an instrument for companies to prove the decarbonisation of their electricity sources and support capacity. This also allows markets, particularly Asia, to attract investors who may be interested in renewable projects.

RECs are expected to increase following moves of various Asian markets, like China and India, to declare their commitment to achieve net-zero by 2060 and 2070, respectively, during the recently concluded United Nations Climate Change Conference. India and Malaysia, in particular, have included RECs in their renewable energy push.

“We believe the increase of RECs will be met with much interest as companies look to reduce their carbon footprint towards net-zero emission goals,” the report added.

According to the report, one REC corresponds to 1 megawatt-hour of emission-free electricity supplied.

Fitch noted that RECs are a means to recude carbon emissions from electricity consumption for companies and government agencies that are not power producers, but for power producers, these are tools for attracting financing for renewable power projects.

“We believe that these functions of RECs for both power producers and consumers will be increasingly utilised in the coming years, showing markets’ support for renewables and presenting upside risks to our hydropower and non-hydropower projects,” Fitch said.