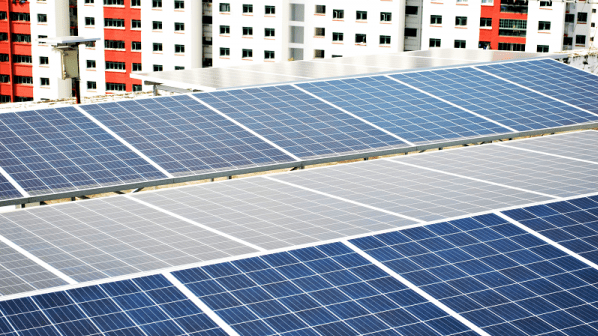 Solar investments are on the rise, but these may not be enough to meet Malaysia’s renewable energy targets.

Solar panels are popping up on rooftops across Malaysia, from Malacca in the south to Penang in the north. An increasing number of commercial and industrial partners are joining the government’s aggressive push for increased solar energy production, enticed by generous incentives and a competitive pricing scheme.

The Net Energy Metering (NEM) programme is the driving force behind Malaysia’s rooftop solar growth. Under this system, consumers can generate electricity for their own use and export any surplus power to the grid. The scheme has proved so popular that the Ministry of Energy and Natural Resources has launched its third edition in 2021, known as NEM 3.0, with a total capacity of 400 megawatts (MW) available to domestic consumers, government entities, and commercial and industrial facilities.

“[These] policies have led to rounds of fresh investments in rooftop solar (commercial and residential) and utility-scale solar farms. These new investments are very visible to the casual observer and, by this metric, the country’s energy sources are getting visibly greener,” noted Renato Lima-de-Oliveira and Mathias Varming of the Friedrich Naumann Foundation.

The rise and rise of solar

Rooftop solar isn’t the only beneficiary of Malaysia’s efforts at drawing solar power investment. In October last year, the country opened its first large-scale floating solar farm, a 13 MW plant in Dengkil, Selangor. The plant, which features over 38,700 solar panels and is constructed on a former mining lake, will produce energy sufficient to power 5,800 households. Half a year later, in April 2021, another consortium revealed that it will construct two 30 MW floating solar farms in Kelantan. Upon completion, the 60 MW project will be the largest floating solar plant in Southeast Asia and the second largest in Asia after China.

In addition, Johor State has revealed the development of a 450-MW Sultan Ibrahim Solar Park in Pengerang, which will be the largest in the region upon completion. The project, which is a part of the 2030 Johor Sustainable Development Plan, marks its first investment into large-scale renewable energy.

“There continues to be a great deal of focus on clean energy, in particular the development of solar-generated energy given Malaysia’s geographic location. From a regulatory standpoint, following the announcement of the Laos-Thailand-Malaysia-Singapore Power Integration Project in October 2020, the Energy Commission has issued guidelines setting out the framework for cross-border electricity sales to Singapore and Thailand. These developments, as well as similar initiatives in neighbouring countries, have generated substantial interest in exploring projects aimed at the cross-border supply of clean energy,” Aziz and Chiah said.

However, Malaysia’s energy transition still faces a spate of challenges. “The cost of solar power has fallen dramatically but solar generation remains variable and intermittent until low-cost storage options become viable. Malaysia’s options for dispatchable renewables are hampered by lack of infrastructure, which will take some time to address,”  noted Lima-de-Oliveira and Varming.

Lower profitability is also an issue. Data from Fitch Solutions show that winning bid prices at solar auctions continue to decline. During the third auction held in May 2020, winning bids ranged from as low as MYR0.1850 per kilowatt-hour (kWh) for 10-MW to 30-MW projects and MYR0.1768/kWh to MYR0.1970/kWh for 30-MW to 50-MW projects.

“Shrinking margins and availability of suitable land represent the main obstacles. Due to falling prices of panels in recent years and increasing competition, tariffs being offered by shortlisted bidders for solar projects have seen a dramatic reduction. It remains to be seen if an increase in the cost of panels will see tariff prices follow accordingly or instead lead to even thinner margins,” Aziz and Chiah noted.

Still, experts are optimistic that Malaysia’s solar boom will continue. “Stronger regulatory support and improved financing for the solar sector, as well as the continued success of solar tenders, further underlines our view of Malaysia being an attractive investment destination for renewables developers,” Fitch Solutions said in a report. “While we expect some near-term headwinds to weigh on growth in 2020, stemming from the COVID-19 pandemic and ongoing political uncertainties, we expect the sector to recover from 2021 and to see stronger growth over the coming years.”

“We will probably see continued interest in solar projects,” Aziz and Chiah concurred. “The Malaysian Government recently stated that they view solar as having the highest potential for increasing the share of renewable energy in the power capacity mix, and it is likely that there will be more opportunities to come for investments into and development of solar projects.”

Malaysia is also eyeing other renewable sources to diversify its energy mix. The government has released plans to build six waste-to-energy plants, and tenders have been issued for two of these projects. Hydrogen is also gaining steam, with Petronas reported to be increasing investments in hydrogen as part of its net-zero emissions goal.

“The announcement of the proposed development of a hydrogen-powered metro line in Kuching, Sarawak has been seen as a clear signal that the government is serious in exploring the viability of hydrogen as a source of the country’s energy needs and has been viewed positively by market commentators given that hydrogen has been identified by a number of other countries as a viable future renewable energy source,” Aziz and Chiah said.

Other regulations and financing incentives have also been put in place to encourage investment in renewables. For instance, the Green Investment Tax Allowance and Green Income Tax Exemption incentives will be extended to 2025, while the Green Technology Financing Scheme 3.0 will be guaranteed by state insurer Danajamin at MYR2b (USD485m).

“The government is also looking to enhance green energy trading with the private sector while planning to launch a Renewable Energy Transition Roadmap 2035. This forms part of the government’s aim to boost the country’s share of renewables in the power mix to 20% by 2025. This is in line with its Generation Development Plan 2020-2030, where they intend to build more renewables capacity to replace retiring thermal power plants. We believe that the roadmap will contain provisions and more specific actions to accelerate renewables growth, and may include strategies such as peer-to-peer electricity trading or transitioning towards a mandatory renewable energy certificate market,” Fitch Solutions noted.

The COVID-19 pandemic is unlikely to dampen Malaysia’s appetite for renewables, but intermittent lockdowns and local outbreaks are likely to cause project delays. “Companies are placing more emphasis on environmental, social, and governance goals now. That, coupled with infrastructure development being a popular form of economic stimulus particularly in developing countries like Malaysia, has led to an uptick in investments in renewable energy projects. The Malaysian energy market has actually been quite active due to that,” Aziz and Chiah explained.

“However, given the intermittent imposition of restrictions to address local infection clusters, as well as disruptions in trade, projects which are in development have been impacted by the higher cost of importing panels and in meeting development milestones giving rise to higher than expected development costs and delays. As a result, it is anticipated that certain projects may not meet their original targeted operations dates.”

Through a mix of financial incentives and attractive pricing, Malaysia has made large gains in boosting the share of renewables in a short span of time. Beneath the surface, however, coal still reigns supreme in Malaysia’s energy mix—and experts caution that more has to be done if the country is to meet its renewable energy targets.

“Malaysia has, paradoxically, recorded both the increase of coal and renewable energy in its matrix,” explained Lima-de-Oliveira and Varming. “An analysis of government statistics reveals that, over the years, Malaysia has become increasingly more reliant on imported coal, the dirtiest of the fossil fuels. As a share of electrical energy generation, coal supplied 46% of the total 150,442 gigawatt-hour in 2016. This high use of coal despite domestically available natural gas and commitments to increase renewables presents a paradox at the heart of Malaysia’s current energy mix.”

Lima-de-Oliveira and Varming argue that in the short term, Malaysia should focus on replacing coal with natural gas. “Whilst coal is generally more affordable than natural gas, it is nearly twice as polluting. Moreover, natural gas is better suited to play the supporting role to intermittent renewables since it is generally cheaper to cycle combined-cycle gas power plants than coal-fired plants of similar scale, and gas can also be used to power smaller combustion engines, specifically designed for flexibility and peak demand,” they said.

“However, the substitution of coal for natural gas alone will not be sufficient to ensure Malaysia mitigates the risks and capitalises on the opportunities of the global energy transition. The government will also need to put in place policies to ensure that Malaysia can adapt, including reducing dependencies on fiscal revenues and seizing new opportunities for new technologies. Replacing coal with gas is the low-hanging fruit and beyond that, the government should develop policies to adapt to and seize the opportunities of the energy transition,” they said.