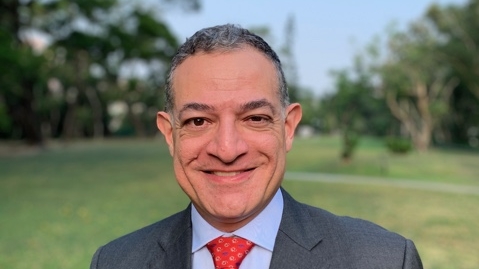 However, Asia’s Energy Revolution author noted that net-zero goals are still in progress.

Joseph Jacobelli has published a new book titled Asia’s Energy Revolution. He sat down with Asian Power’s Managing Director Tim Charlton to talk through the changes taking place as the region slowly wakes up to net-zero.

Where is Asia right now in its power transition?

The region is likely to annually spend at least $1t through 2050 in its energy transition.

Right now, Asia consumes almost 50% of the global energy consumption. What that number does not tell us is that 11% of that is from developed Asia, so 89% is from emerging Asia. A lot of these emerging economies are incredibly sizable like China, India, and Indonesia. China is going to at least grow its consumption threefold, if not more, by 2050. Then there are some emerging markets like Sri Lanka, where consumption may rise as much as 20-fold. The region will aggressively add clean energy sources and gradually shift its energy mix away from fossil fuel-based generation. The elephant in the room is, of course, China.

China right now has about 1,080 gigawatts of coal power generation. The planners have said that it is going to peak at 1,100 gigawatts in 2025. So there's an extra 20 gigawatts, but it is a net number. They are actually building newer plants and closing down older or smaller ones. The big question is with nuclear because they will need some very chunky amounts of generation in order to offset the coal generation plants likely to close down. China had about 50 gigawatts of nuclear energy at the end of 2020 and targets 75 gigawatts by 2025. The big question is whether the amount will be 300 or 500 gigawatts by 2050. China has been concerned about nuclear safety so they are not going to put up gigawatts of nuclear energy if they are not 100% comfortable with the safety of the technology.

For coal, now there is a bigger global pressure, which is net-zero emissions by 2050. So countries are very aggressively exploring green alternatives—and that's not limited to solar and wind. We know that some countries, such as Thailand and Vietnam, have been very successful when it comes to introducing more green and sustainable power. I expect a substantial rise in the region in offshore and floating wind, more decentralised solar systems, and more energy storage.

At a bare minimum, you have got to go low carbon. Then Southeast Asia will have to really come up with a more credible blueprint as to what it wants.

In your book, you talked about the dramatic rise of electric vehicles. How will this impact the consumption of power?

Indeed, in the book, I discussed one key upside factor to consumption growth, electric mobility, and one limiting factor, energy efficiency. I argued that the upside factor is highly likely whilst the limiting factor is unlikely to be effectively implemented region-wide. On e-mobility, one example of an “upside” move is Singapore. All vehicles, like buses, taxis, etc., will be clean energy vehicles by 2040. It means that the rate of electrification in the transport industry in places like Singapore is also going to go through the roof, and that is being replicated in other places like China. Japan is a little bit slow off the mark in terms of hard targets, but there are countries like Thailand, Sri Lanka, and even Pakistan, with electric vehicle (EV) targets. So we will see a lot more goals-setting and battery-powered electric vehicle numbers going through the roof. This means that more generations will be needed.

Let us talk about specific markets and, perhaps, start with Australia, which is the most advanced along its energy market deregulation journey.

Some, especially the politicians, say that Australia has had unsuccessful deregulation, but I actually disagree because the Australian consumer now has a choice. Whether residential, commercial, or industrial, today, users shop around for the best price. Also, the quality of service has vastly improved.

The issue, however, has been one with the federal government because the coal and the gas industries are humongous for the economy down in Australia; so, there has been this distortion.

Nevertheless, states and the private sector have successfully driven the energy transition. For example, there are 15 gigawatts of rooftop solar as we speak today, so it is absolutely amazing.  There are also massive clean energy projects being planned. These include the Asian Renewable Energy Hub, which will take ten years and cost about A$36b ($25.2b). It will involve building massive wind and solar facilities of about 26 gigawatts in the East Pilbara region of Western Australia. Another is the 10 gigawatts Sun Cable project, called the Australian–ASEAN Power Link, which will take about seven years and cost about A$22b ($15.4b) to develop.

Now, let us look at Hong Kong. What is happening there?

I live in Hong Kong and the two major utilities here are CLP Power Hong Kong and Hongkong Electric. They have been shifting their energy mix towards gas, slowly but surely, and that is going to continue. The companies operate on a rate-based return, which means that the companies are allowed a return on investments from the net assets, under long term contracts with the government. The two Schemes of Control Agreements will expire in 2033. The big question is if these will be extended or not? Currently, the two companies have a virtual monopoly over generation and supply. So, will that be broken and what happens to stranded assets?

For Hong Kong to use more green electricity, it can import more nuclear energy from Mainland China and it can also import solar or wind power. So the first thing that needs to be addressed is the fate of these contractual agreements between the utilities and the government post-2033. Then, the other big question is whether Hong Kong is going to 100% adopt the Chinese energy policy, which, so far, it has not. Meaning adopting a deregulated power market and prioritising clean energy resources.

On the mainland, generators can sell directly to commercial and industrial users, just like in Singapore or in Australia. They are just not allowed to do so with residential or the agriculture sectors yet. That is one piece of deregulation that you have in Mainland China that you do not have in the Special Administrative Region. The second piece is clean energy. China is the undisputed global clean energy leader in terms of how much it has built, in how it manages its capacity in terms of its planning. For example, there are offshore wind farms near Hong Kong but they are not selling power to Hong Kong, they are selling power back into Mainland China. The country had 570.5 gigawatts in solar and wind capacity at the end of August; and in the first eight months of 2021, it added 36.7 gigawatts.

Let us talk about how you see the green financing revolution.

I will split that into two concepts. One is plain vanilla financing. For example, at the end of the day, green bonds are just bonds. Now you've got a whole new generation of bonds, including sustainability-linked bonds, where a company will issue a bond and if it meets XYZ target, by whatever year, they will pay a slightly lower coupon rate. If they do not match it, they will pay a slightly higher coupon rate. I expect the Asian credit market to boom in the coming years. I recently estimated the amount of such bonds issuance could reach $350b in 2025 from $53b in 2020.

On the public equity side, we haven't seen a massive amount of green and sustainable companies listing in the region. I think what is going to happen is that the green portfolios of companies, such as some of the big electric power groups in the region, will list in stock markets over the next few years.

On the lending side, Asian banks have been slow in adopting net-zero emissions targets, whereas, in Europe, a whole bunch of banks have said that by 2050 they will have a net-zero emissions portfolio. It also means lending to green and sustainable companies is going to be significantly higher.

We have seen some moves out of the Singaporean banks like DBS and OCBC to cut loans to coal-fired projects and we have seen Chinese banks being aggressive in looking at setting net-zero targets. However, other banks have been a little bit slow. So, I think the second trend that we should see over the next five years or so is a lot more Asian banks declaring their net-zero emissions targets. That is going to help a lot with the funding of green and sustainable projects in the region.