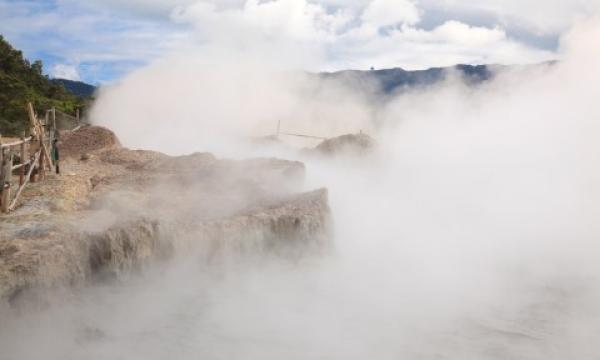 Indonesia is expected to overtake the US in leading the global geothermal power sector.

However, geothermal growth will be driven by only a few key markets—particularly in Indonesia—as these resources are restricted to tectonically active areas, and remain fairly dispersed across regions.

The country is situated in Southeast Asia at the intersection of many tectonic plates, giving it considerable geothermal potential, but most of its potential reserves remain unexplored. The main geothermal plants are spread across Java, North Sumatra, and North Sulawesi, constituting less than 3% of the total installed generation capacity.

Expanding the geothermal industry is said to be a key priority for the Indonesian government given the vast potential for geothermal power generation in the country, estimated at about 28GW, the baseload nature of the resource and continued elevated power demand across the country.

Just in 2019, Indonesia added about 185MW, following the 135 MW installation in 2018. The Indonesian government has a;sp set a target of 23% renewable energy in the energy mix by 2025, this means that geothermal power capacity will reach 7GW by 2030.

“Many government policies and resolutions are helping to explore reserves of geothermal energy. Approximately 80% of the country’s geothermal reserves are in conserved forests, and the development of projects in these areas requires a presidential decree,” said Ankit Mathur, Practice Head of Power at GlobalData.

According to IEEFA analysts, this includes changing regulations i.e. geothermal energy is not categorized as part of the mining sector, hence giving it a better playing field when applying for forestry use permits.

Aside from these, the Ministry of Energy and Mineral Resources is also looking to complete a regulation on electricity tariffs and geothermal drilling and exploration by the end of this year to mitigate some of the risks and encourage more investments into the sector.

“The implementation of the country's feed-in tariffs (FiT) for geothermal is expected to offset the high capital costs associated with geothermal production and promote more investment in the region and is considered a successful initial move for the geothermal sector,” said Mathur.

Under its "Roadmap for Geothermal Resources," Indonesia pursues a strategy of managing geothermal work areas (GWAs) selected by private companies and offers unique tax incentives for the geothermal industry. The program provides incentives for the private sector to use certified emission reductions (CER) to raise carbon revenue.

The Forestry Ministry also plays a crucial role in the production of geothermal resources, as most known reservoirs are located beneath protected forest areas. Despite some clear policy support to promote the production of geothermal energy, it is imperative that steps be taken to avoid land acquired for geothermal energy use from being high conservation value forests or vulnerable habitats, and to minimize the impacts and risks on the forests.

However, IEEFA analysts noted that the problem with geothermal projects in Indonesia for the past 3 years has been about the economics of the project that cannot compete with the current Building Performance Prediction (BPP) regulation. Also, 80% of geothermal potential lies in conservation forest, making forestry permits a real headache for developers.

Geothermal is not expected to hasten unless the new tariff regulation is set in the upcoming Presidential Regulation for Renewable Energy. It is said that the geothermal players are lobbying to get fixed feed-in tariff instead of maximum price limit, to avoid having prolonged negotiations with PLN.

Other obstacles in developing geothermal energy in Indonesia include policy inconsistencies, bureaucracy, lack of decent infrastructure, high investment costs such as high exploration, engineering and procurement costs, as well as high risks.

Key markets to watch for in Asia
Fitch further noted that Indonesia, Turkey, Nicaragua, Japan, and Kenya are listed as the top five fastest-expanding geothermal markets over the coming decade, and will offer notable investment opportunities.

By 2025, the majority of the growth amongst the APAC geothermal markets is likely to come from Indonesia, Philippines, and Japan. In the longer term, China is also likely to join the group as it improves its technology and formulates the policy landscape during the learning curve, according to Mathur.

The pre-development risks associated with geothermal technology are high, which is a key reason for the slow development of this technology. Policy measures, which are mostly targeted at solar and wind sectors, need to be geared towards tackling the challenges in the way of geothermal energy development.

On the other hand, China is still at an early stage of development of geothermal power generation. However, the country has taken a lead in developing geothermal resources for heating purposes. This has resulted in enabling the government to put forth concrete steps towards carbon mitigation and power sector decarbonization.

On an annual average basis, the Philippines will have the second largest geothermal capacity in the Asia region and fourth largest globally over the next decade, according to Fitch Solutions. The country showed a strong existing capacity despite the limited growth forecast for the country posing a downside risk with growth coming mostly from the country's strong existing geothermal capacity and forecast limited growth in the renewables sector.

Mathur believes that implementing guaranteed power purchase price under FiT [Feed-in-tariff] for geothermal can help the Philippines to boost its efforts in unearthing unexplored geothermal potential.

APAC to gather steam in geothermal resources
Amidst the pandemic, the outlook for the geothermal sector has barely derailed. On the contrary, GlobalData firmly believes that the pandemic has increased the intent of the governments to diversify from fossil fuel generation to planning increased participation from renewable energy sources.

The APAC geothermal market seems to be hitting the right notes with the pandemic providing the ample push for the APAC nations rich with geothermal resources to develop the resources for both power and heating purposes, said Mathur.

The market, which has been stagnant due to lack of policy measures and development intent from the governments, is likely to gather steam as renewables gather higher importance amid the COVID-19. Energy security and dependence along with de-carbonization of the generation mix will help expand the geothermal resources at a faster pace.

IEEFA analysts further noted that the private sector will play a larger role in delivering large investments and expertise required for the development and maintenance of geothermal projects amongst others, particularly in Asia if it is willing to take the high risk.

Globally, geothermal power capacity is expected to grow by an annual average rate of 2.5% between 2020 and 2029, to reach slightly over 18GW by 2029, Fitch Solutions said. This total installed capacity is notably lower compared with other renewable energy technologies, particularly in wind and solar power.

By the end of the 10-year forecast period, the geothermal segment will comprise just 0.7% of global installed non-hydroelectric renewables capacity and around 2.0% of total non-hydro renewables generation.