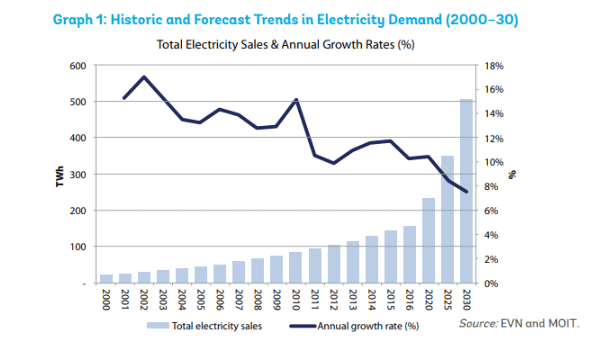 From a new FiT policy to a different market mechanism, the country is finally opening up.

Vietnam’s wind power pipeline is set to get a massive boost after UK-based developer Enterprize Energy pledged a US$12b investment to develop a 3,400MW offshore wind park in Ke Ga, Binh Thuan province. Projects of this nature are expected to nudge the country closer to its 2030 renewable targets, and address a nationwide hunger for more electricity coupled with worsening air pollution in several urban areas.

This US$12b investment should meet estimates of US$8-12b annually to meet the country’s growing demand. According to a report by The World Bank, demand for electricity has grown at a compound annual growth rate of 13% since 2000, and is expected to grow at 8% from today to 2030. The Vietnamese government has estimated that generation capacity needs to go from 42GW currently to 60GW by 2020 and to 100GW by 2030, requiring 5GW annually between 2018 and 2030.

The country’s Strategy for Renewable Energy Development also hopes to triple electricity output produced from renewable sources from 58 billion kWh in 2015 to 186 billion kWh by 2030, targets that have been dubbed as ‘bold’ and ‘ambitious’. Recent changes in the industry, including the recent introduction of a new feed-in-tariff mechanism for solar projects, may prove these judgments otherwise.

Whilst huge strides have been made in the renewables sub-sector, continual growth and increasing power shortages in Vietnam still necessitate traditional sources of thermal generation. The country’s leaders recognise that coal consumption will only increase for the next few years and bring the 45% share of coal at present to around 53% in 2030. Giles T Cooper, partner, Duane Morris Vietnam LLC, said that more coal-fired plants will be put up in the short-term, whilst gas and LNG facilities will also be vital in the extended future.

Power producers are also expecting a gradual shift to the wholesale market mechanism in the next few years, and this move carries with it its own challenges. Frederick Burke, partner, Baker & McKenzie Vietnam, said that the current ecosystem may experience externalities and barriers to an efficient market, considering that Vietnam is only halfway to becoming a true market system.

Looking for the silver bullet
No one-size-fits-all scheme has worked to address rather similar power issues across various countries in the region, with specific strategies working well in some and failing in others. According to Cooper, managing the risk associated with power shortages calls for various strategies and actions, such as importing from neighbouring countries like China, reducing overall energy demand, and increasing prices.

Burke argues that faster administrative processing of alternative energy and gas, particularly solar and wind, would also help bridge the gap until large-scale gas projects are fully operational. He added that an urgent revaluation of the proposed 20+ coal-fired power plants in the pipeline could help transition to more sustainable sources, knowing the hazards that these coal plants bring to agricultural resources and human health. “Gas comes out of this discussion as the option that will take up the lion’s share of the country’s energy needs, but with renewables playing a substantial role too,” he said.

An advantage presents itself at the moment, with the favourable global pricing of liquefied natural gas (LNG). According to David Harrison, partner, Mayer Brown, Vietnam can use this to fuel gas powered projects with over 7,500MW of generating capacity, in addition to exploring greenfield LNG to power projects. As for renewables, the government may need to be more aggressive and ambitious than it already is--especially with the demand from Ho Chi Minh City and its surrounding provinces of Dong Nai, Binh Duong, and Ba Ria-Vung Tao.

Another welcome development is the launch of a draft policy for two-year solar power feed-in-tariff mechanism effective 01 July 2019 until 30 June 2021. Unlike the first FiT with a flat rate, the long-awaited policy proposes varying levels of tariffs, depending on the three different irradiation regions of Vietnam and across four different solar power technologies.

Harrison said that the renewable strategy must continue to focus on solar and wind, which includes consideration of the views of foreign developers and financiers. Currently, Vietnam has a large pipeline of planned build-operate-transfer (BOT) coal-fired power projects that may not be bankable due in large part to lenders’ social and environmental concerns, as well as the quality of proposed government guarantees regarding thermal power plants.

“With the environmental and health costs of coal being increasingly recognized, and COP21 commitments being taken into account, gas, both domestic and imported, is increasingly being seen as the largest part of a long term solution. Renewables, especially solar and wind, are more and more seen as a material part of the energy portfolio, especially as multinational manufacturers insist on green supply chains. Energy efficient has a role too, in so far as low prices have kept the interest in energy efficient low till now, and that can’t last forever,” said Burke.

Remixing the energy mix
Hydropower dominates the current energy landscape of Vietnam, followed by gas and coal. The World Bank notes that the country has been extremely successful in exploring its domestic gas, coal, and hydropower reserves. But whilst the country has a high share of renewables in its overall energy mix at present, its domestic energy resources are also limited and Vietnam is projected to import more and more energy from other countries.

Fitch Solutions reports that the energy mix by 2028 will be composed of coal (170.316 TWh), hydropower (76.972 TWh), natural gas (75.94 TWh), non-hydropower renewables (12.679 TWh), and oil (1.286 TWh). Analysts caution authorities that there are downside risks to this positive coal-fired power growth outlook, especially as they expect coal prices to increase due to a market deficit for coal over the next five years.

In the long run, Vietnam should start exploring more of its other renewable sources, such as biomass from crops to geothermal and tidal technologies. For good reason, the government has focused on solar and wind, and with recent changes to the regulatory framework, international funds are being unleashed for utility-scale projects as well as private funds for rooftop solar projects.

“We will continue to see the government developing the regime for solar and wind-powered projects. Solar has an estimated potential capacity of over 7,000MW but land issues, the quality of the template power purchase agreement (PPA) and technical grid connection issues pose challenges. LNG will also be crucial to Vietnam’s success in meeting its energy challenges,” Harrison added.

The development of an integrated greenfield LNG to power project also needs a comprehensive legal structure, but there is no model PPA for LNG to power projects and stakeholders are still unclear on how critical issues such as force majeure would be addressed. Harrison said that there is also a question of whether the government may be willing to provide more robust offtake guarantees than those offered in recent years.

Shifting the market paradigm
When the country set out on a reform plan of the energy sector in 2006, the endgame in mind was a competitive electricity retail market by 2023. With only four years left in the clock, several problems have yet to be resolved. In addition to facing issues with externalities, barriers, and pricing, the country also needs to develop its national transmission system. Harrisson said that it is not clear whether or not the timeline will be strictly adhered to or extended. He notes that the decision is effective through 2025, but beyond 2025 the landscape remains unclear.

“Notably, the national transmission system needs substantial investment. A functioning market needs to be able to rely on transmission infrastructure to ensure uniform access to power, that supply can reliably meet demand and pricing is fair and transparent,” Copper added. Vietnam’s long and thin geography has proven to be a barrier in terms of improving transmission and distribution infrastructure.

There is also a conflict between keeping energy prices down to continue attracting foreign manufacturing investment, on the one hand and raising prices to accumulate the funds needed to continue growing the grid. According to Burke, questions are also being raised around whether the transition from a national monopoly buyer to more and smaller distributors will reduce the remedies for the producer and whether the more numerous, smaller buyers be better credit risks than a single national champion.

There is a significant demand from the private sector, especially foreign MNCs that are active in Vietnam and which are also RE100 companies, to directly procure renewable energy. “Facilitating these 'direct corporate power purchases' by establishing an enabling legal framework would be a great spur to finance renewable energy generation in Vietnam. The government is currently looking at this closely and it is hoped that a pilot project will be in place later this year,” Cooper added.