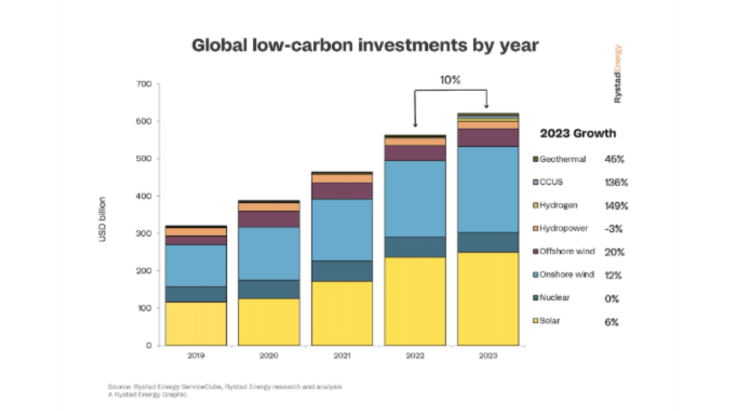 This is a slowdown compared to the average of around 20% increase in recent years.

Spending on low-carbon projects is expected to increase by 10% year-on-year (YoY) or by $60b in 2023 to reach $620b, led by developments in the wind sector and an increase in funding for hydrogen, and carbon capture, utilisation and storage (CCUS).

However, the total spending growth slowed compared to recent years which averaged around 20% annually due to cost-conscious developers tightening their expenditure following two years of price increases, according to a report by Rystad Energy.

In 2022, investments in low-carbon projects grew by 21%, overtaking related oil and gas spending for the first-time. Developers are expected to limit their spending growth this year due to inflation but it is expected to rebound as inflationary pressure eases.

“The weaker-than-expected growth is not a reason to panic for those in the low-carbon sector. Rampant inflation typically triggers fiscal restraint across industries, and spending will likely bounce back in the coming years,” said Audu Martinsen, head of supply chain research at Rystad Energy.

“The outlook for hydrogen and CCUS is especially rosy as technology advances, and the large-scale feasibility of these solutions improves,” Martinsen added.

Rystad Energy solar and onshore wind will contribute “the most sizeable margin” as solar investments are seen to total $250b, up by 6% YoY.

The decline in the cost of polysilicon, however, will result in substantial capacity growth than dollar investments, increasing by around 25% to 1,250 gigawatts (GW).

Meanwhile, hydrogen and CCUS will see the most significant increase, with hydrogen spending expected to rise by 149% YoY to reach around $7.8b, and CCUS by 136% YoY to around $7.4b.

Onshore wind will increase by 12% to $230b, whilst the offshore wind is seen to increase by 20% to $48b. Spending on geothermal is also seen to grow by around 45% despite starting at a relatively low position.

Hydropower, on the other hand, will shrink and nuclear investments will be relatively flat.