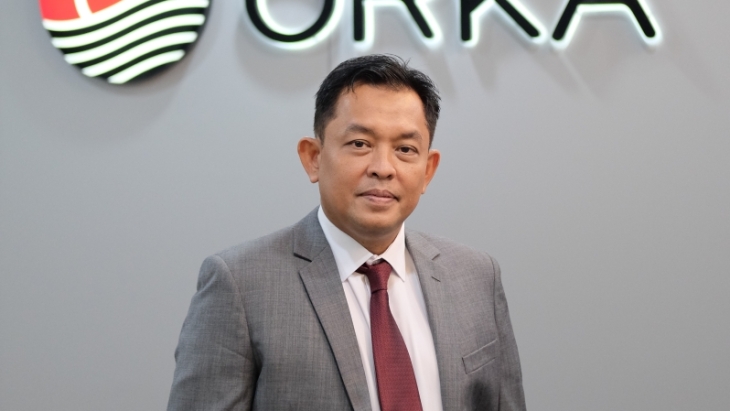 By implementing this strategy, the company can mitigate the risk of incurring a $5m loss from drilling a single well.

When it comes to developing geothermal power plants, the traditional approach can be risky and time-consuming. But Indonesian power plant developer KS Orka has found a solution: the gradual development model. This model enables KS Orka to minimise operational risk and costs, converting any well with a pressure of 4 bar or more into electricity. This not only reduces the risk of drilling wells that do not generate revenue but also speeds up the development process, taking just five years to reach a target capacity of 220 MW. By using an expander instead of a turbine, the company is able to simplify the conversion of energy into electricity.

There are at least two critical financing for geothermal developers, namely drilling costs and power plant construction costs which take up around 80% of the total financing of a project. "So if we can make cost efficiencies, speed up power plant construction time and reduce drilling risk, in the end, we can still implement projects with the business value expected by investors," said Riza Pasikki, Chief Operating Officer & Chief Technology Officer of KS Orka to Asian Power.

KS Orka applies a gradual development model using a modular power plant concept with technology from Kaishan Manufacture which is their sponsor. The Kaishan power plant technology has high flexibility in terms of well characteristics. Wells with low pressure (3 bar) can still be used for electricity generation so that subsurface risk, which is one of the biggest risks in geothermal development, can be minimized.

Gradual development model is carried out by KS Orka through its two geothermal power plants, namely Sorik Marapi Geothermal Power (SMGP) in North Sumatra and Sokoria Geothermal Indonesia (SGI) in East Nusa Tenggara. Riza said that this was different from most other developers who did it serially. According to Riza, this gradual model is much more efficient in minimizing development time and reducing initial investment, which in turn reduces the payback period of the investment model.

“So far, the developers have been doing it serially. This means that when they target the development of 240 MW, after the exploration process, they will first drill massive wells to ensure that the steam needed is sufficient for the operation of the 240 MW power plant, then they can enter the construction phase and start operations," said Riza.

According to Riza, this method usually takes a long time, even up to ten years. Meanwhile, with gradual development, the time needed is much shorter. For example, the development of SMGP Unit-1 with a capacity of 45 MW was completed in just 3 years after the exploration well was drilled, followed by Unit-2 in 20 months.

"It's different from us, which implements gradual development," explained Riza. He gave a further example of the phased model in the SMGP project by dividing the 240 MW development into 5 phases. The first phase (45 MW) started operating in late 2019, the second phase (45 MW) in 2021, and the third phase (50 MW) has been operational since October 2022. The fourth unit (50 MW) which is currently under construction is expected to start operating at the end of 2023 and the fifth unit (50 MW) in the following year so that a total generation of 240 MW can be achieved by the end of 2024.

The technology they use also allows for a faster fabrication and installation process and is very flexible to the pressure and enthalpy conditions of the well. "In our two projects, wells with any performance can still be converted into electricity. So there are no wells that are not functioning," said Riza.

"The application of modular technology also allows the placement of each power plant close to the well (decentralized wellhead power plant) thereby eliminating energy loss when flowing steam from the well to the power plant located on the pipeline as is the case in geothermal projects that are generally developed in a centralized manner," added Riza.

To better support this model, KS Orka doesn't use turbine technology like other developers but uses a screw expander. According to Riza, the structure of an expander is much simpler than a turbine, it has fewer moving parts and is reliable. The screw expander in this modular generator can be applied to various operating needs and different well characteristics.

"By using an expander there will be no wasted well drilling, in contrast to a turbine which requires equal steam pressure from all production wells. Meanwhile, with an expander, various well characteristics with different pressures and enthalpies can still be used to generate electricity," said Riza.

"Apart from that, the structure is simpler so that the operation will also be easier and more permissive to the concentration of NCG (non-condensible gas) and liquid droplets and even to small solid particles contained in steam from production wells. Even though the NCG content has increased, it has not significantly reduced the work efficiency of the expander," he added.

KS Orka also made breakthroughs in the subsurface area including drilling. For example in selecting a fit-for-purpose rig in the SMGP project which is no longer in the exploration phase where the reservoir conditions and the depth of the well to be drilled are well defined, which is no more than 3,000 meters.

With this understanding, a rig with a capacity of 1,000 HP is sufficient to achieve the drilling target so that savings especially in fuel costs, which can cost up to 12% of the project cost, can be realized. Drilling at SMGP with a cost of between $3.5 - 4 million per well is low compared to other developers on the island of Sumatra," said Riza.

"That is also our advantage so that in the end we can reduce costs and be able to provide electricity at a price below the State Electricity Company (PLN) Basic Cost of Supply (BPP), 8.1 cents/KWH in SMGP and 12.5 cents/KWH in SGI. We do this to support the government's efforts to make geothermal energy not only clean and reliable but also affordable," said Riza. "Of course, all the breakthroughs that have been made by KS Orka were also carried out without the slightest reducing concern for safety and the environment," he added.

KS Orka has currently carried out several project contracts with PLN. The first is the SMGP project with a current installed capacity of 140 MW through geothermal power plants units 1, 2, and 3. Development of the SMGP field is continuing to achieve a generating capacity of 240 MW in 2024. The second project, SGI, starts with the first unit of 5 MW in March 2022. “Next year in March, we will enter Commercial Operations Date (COD) the second unit which is currently in the construction stage of 3 MW, then in 2024, there will be an additional 11 MW. Finally, in 2025 there will be an additional 11 MW. So the total is 30 MW," said Riza.